Bob Dylan’s classic song from 1975 has absolutely nothing to do with Brattleboro, Vermont on September 1, 2016, except when I heard it in the morning that day while browsing the goods at Sam’s Outdoor Outfitters, it bored deeply into my cranium, perhaps because it is one of two songs (with “Hurricane”) bringing me belatedly in the mid-seventies to Dylan’s oeuvre. Now, by sheer coincidence, “Tangled Up in Blue” always will remind me of Brattleboro, and this is why I love music’s serendipitous meandering.

We had rented a spacious Airbnb apartment in a house on the ridge above town, just behind a row of strange lookalike old factory buildings. Further down the hill is Whetstone Brook, which empties into the Connecticut River.

Our morning walk began by crossing this creek to Elliot Street for breakfast at the Restless Rooster. The omelettes were substantial and the coffee suitably black. As we ate, an itinerary for the day was devised. Next stop was Sam’s Outdoor Outfitters. 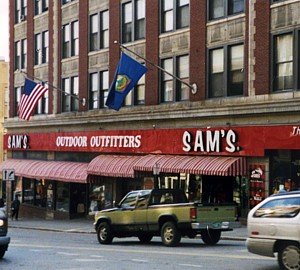 Sam’s dates to 1932 and began as an Army and Navy surplus stores.

SAM’S was and is, today still, a family owned business in its third generation. The business has thrived and expanded to a total of 3 Department Stores in operation today. The other 2 stores are in Keene, NH and Hadley, MA.

It was unfolding as a normal shopping experience in an oddly configured old-school warren of urban retail spaces, several components of which have been connected to each other, when suddenly came a double whammy.

First Dylan’s narrative, then the sight of an unobtrusive yet compelling “memorial” to the store’s founder, Sam Borofsky. This article from 2011 provides background.

From Russia with love: The Borofsky legacy, from the old country to Brattleboro, by Fran Lynggaard Hansen (Commons News/Vermont Independent Media)

… Like so many families in Brattleboro, the Borofsky story is one of hardscrabble immigrants and their children, the first generation Americans who made good.

Stanley “Pal” Borofsky recounted his family’s history with the satisfaction of a son proud of his father’s success.

The mini-shrine was nothing more than old photos and a plaque of sorts, explaining Mr. and Mrs. Borofsky’s lives, but it touched me deeply, perhaps because of my own small business tenure.

84 years later, the business climate has changed, and while Sam’s remains ensconced in downtown Brattleboro, the founder’s grandson isn’t sure how much longer this will continue.

Brattleboro’s Barber Building up for sale … Sam’s: Staying in business … for at least another 10 years, by Robert Audette (Brattleboro Reformer)

A landmark building in downtown Brattleboro is up for sale. The Barber Building, which has been in the Borofsky family for more than seven decades, houses Sam’s Outdoor Outfitters and about 50 apartments. On Friday, Brad Borofsky told the Reformer that the family was getting out of the landlord business and had listed the property with Ranger Curran of RE/MAX Town & Country.

Much luck to the family as they chart their future course. After coffee, there was a walk to the Prospect Hill Cemetery on a hill to the south of the center … 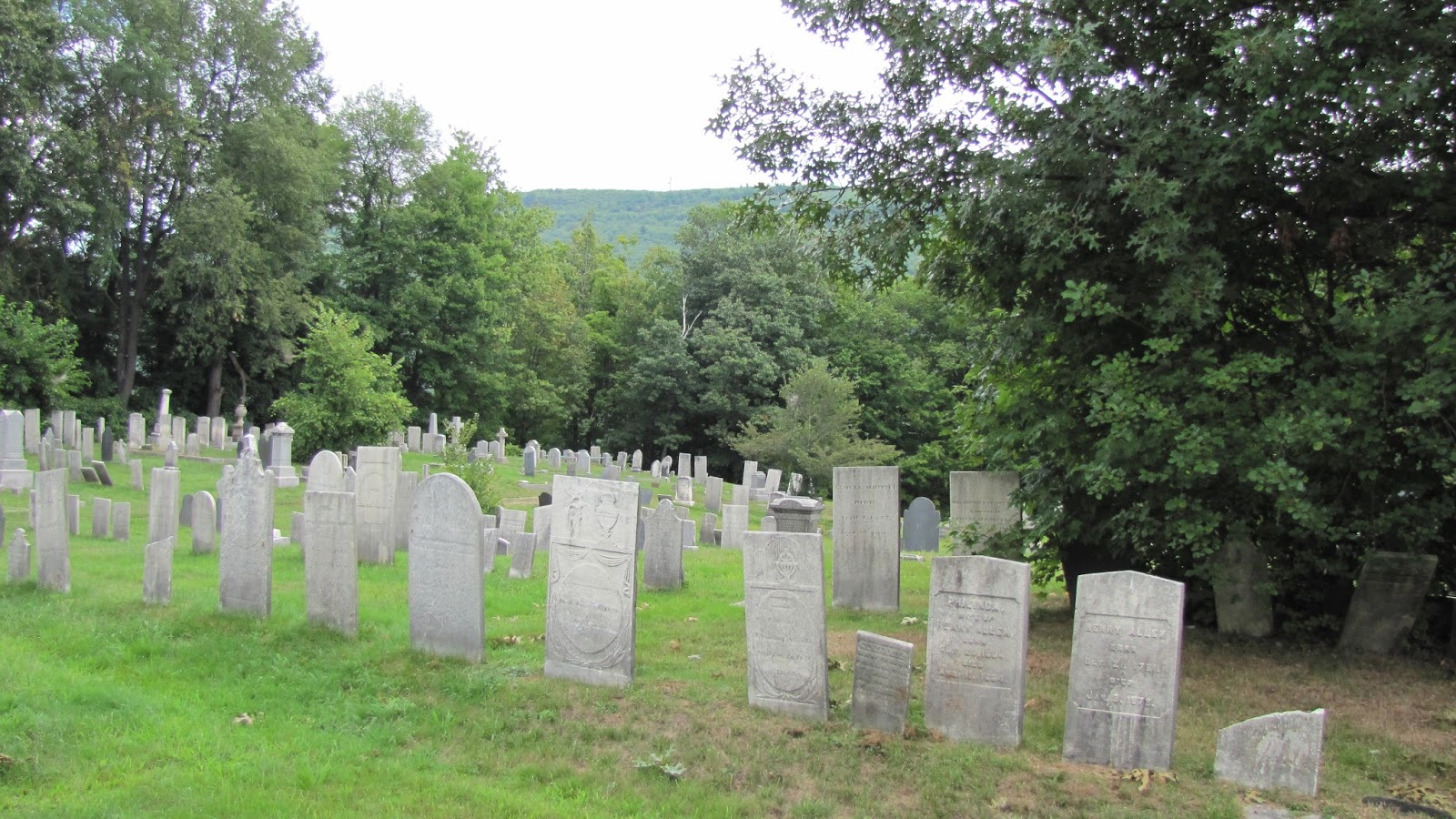 … then an examination of the buildings of the former Estey Organ Company, but not before one of the oddest sights of the trip. 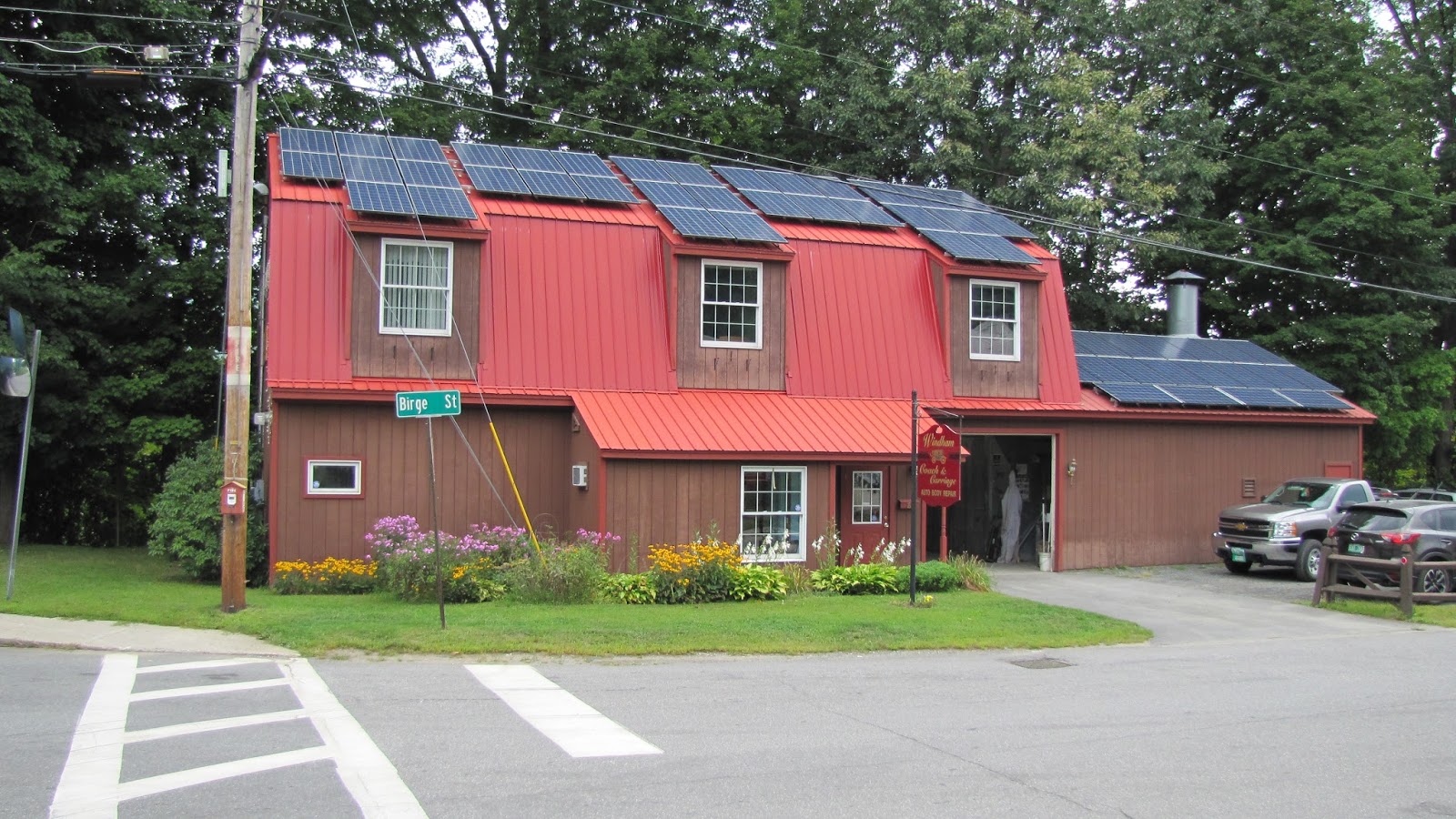 It’s an auto body shop with solar panels and flower beds. Just to the east on Birge Street is what remains of the Estey Organ Company. 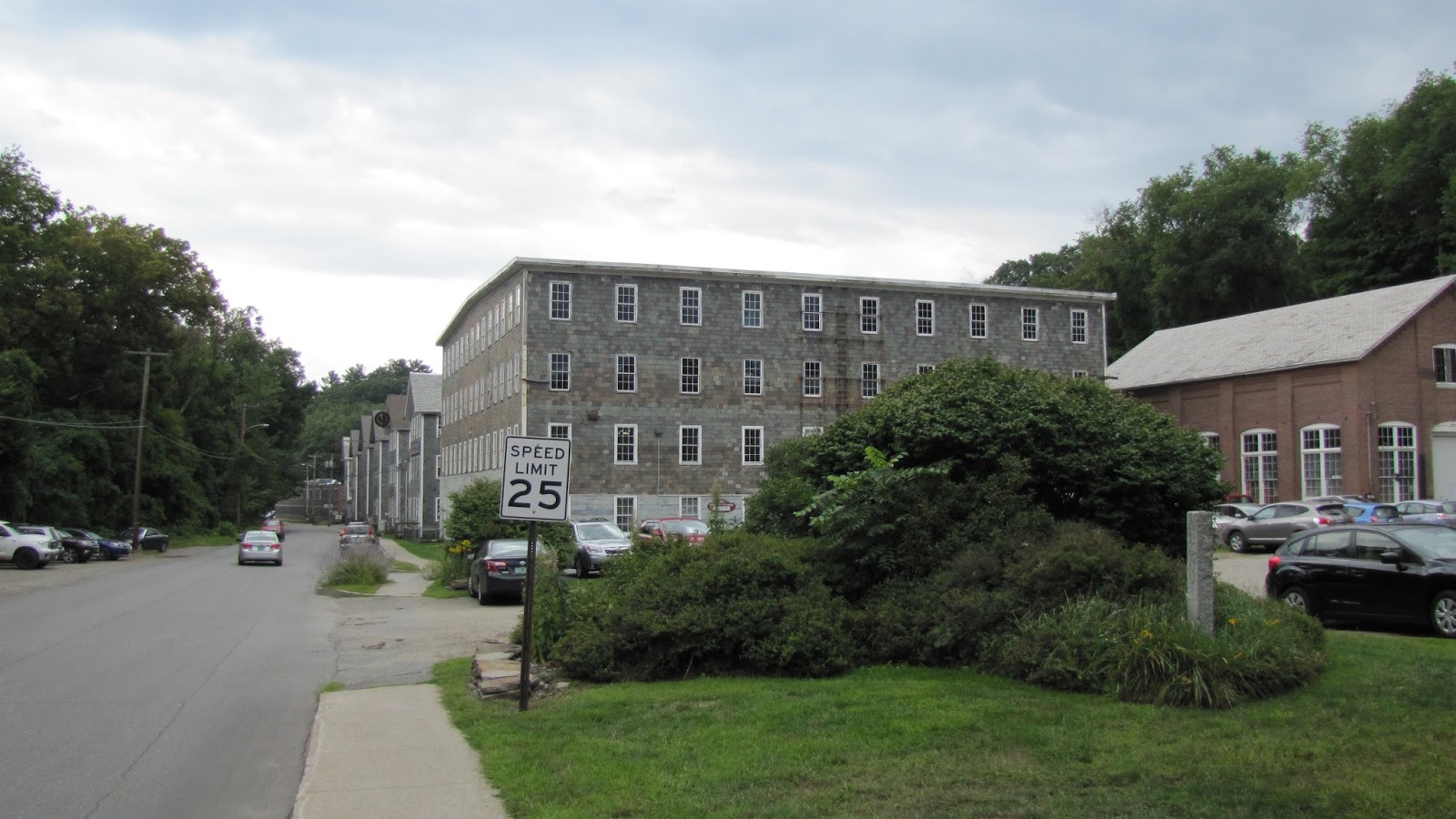 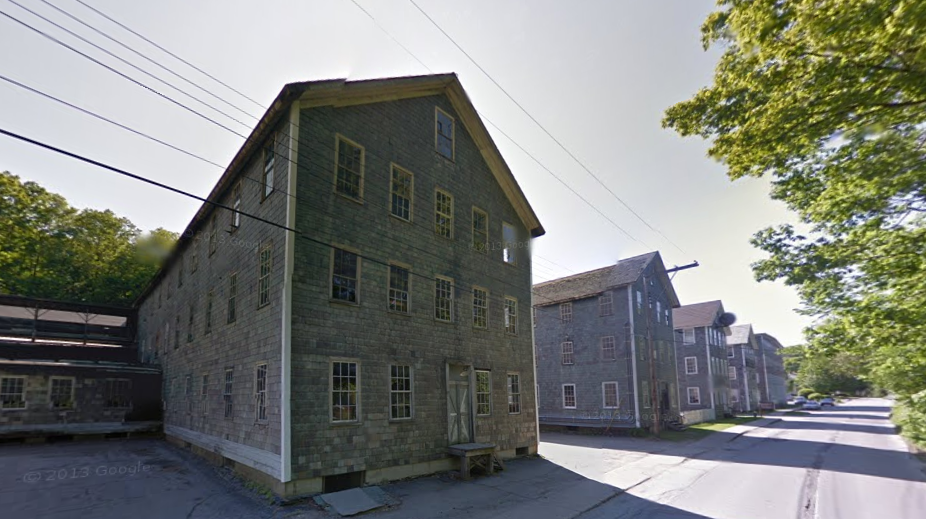 By the late 1800s, more than 500 workers occupied these buildings, tasked with the construction of reed (and later pipe) organs.

The former Estey Organ Company factory comprises a nineteenth century industrial complex of eleven principal buildings together with several outbuildings and related structures The complex occupies a narrow terrace on a hillside above Whetstone Brook, bounded on the east by Birge Street and on the north by Estey Street.

These remaining buildings appear to be in the process of gradual restoration and adaptive reuse. There are several businesses therein, and a day care center. There’s also a museum.

… After a devastating flood in 1869, the company purchased a large tract of land in Brattleboro to re-build the factory. The new factory buildings were designed with fire prevention and fire fighting in mind. On the land behind the factory, workers were offered lots on which to build homes. This area, known as Esteyville, became a village in which Estey employees and their families lived, worked, attended school, recreated, and worshiped.

The Estey complex being a literal stone’s throw from our room, there was a brief period of rest and recuperation, followed by an early dinner.

The view (with beers) at Whetstone Station Restaurant and Brewery in Brattleboro, Vermont.

The day’s final stop was at the Brattleboro Food Co-op. I found it incredible, and the beer section alone sufficed to blow my mind, but not everyone likes what the co-op has become:

“What we have now is indistinguishable from a Whole Foods Market or a Trader Joes, except our prices are a little higher.”

And, through little fault of its own, the co-op made the headlines in 2011, when a longtime employee murdered his immediate supervisor on the co-op’s premises. 2011 sounds like it was a bad year in Brattleboro.

Now, about that beer. 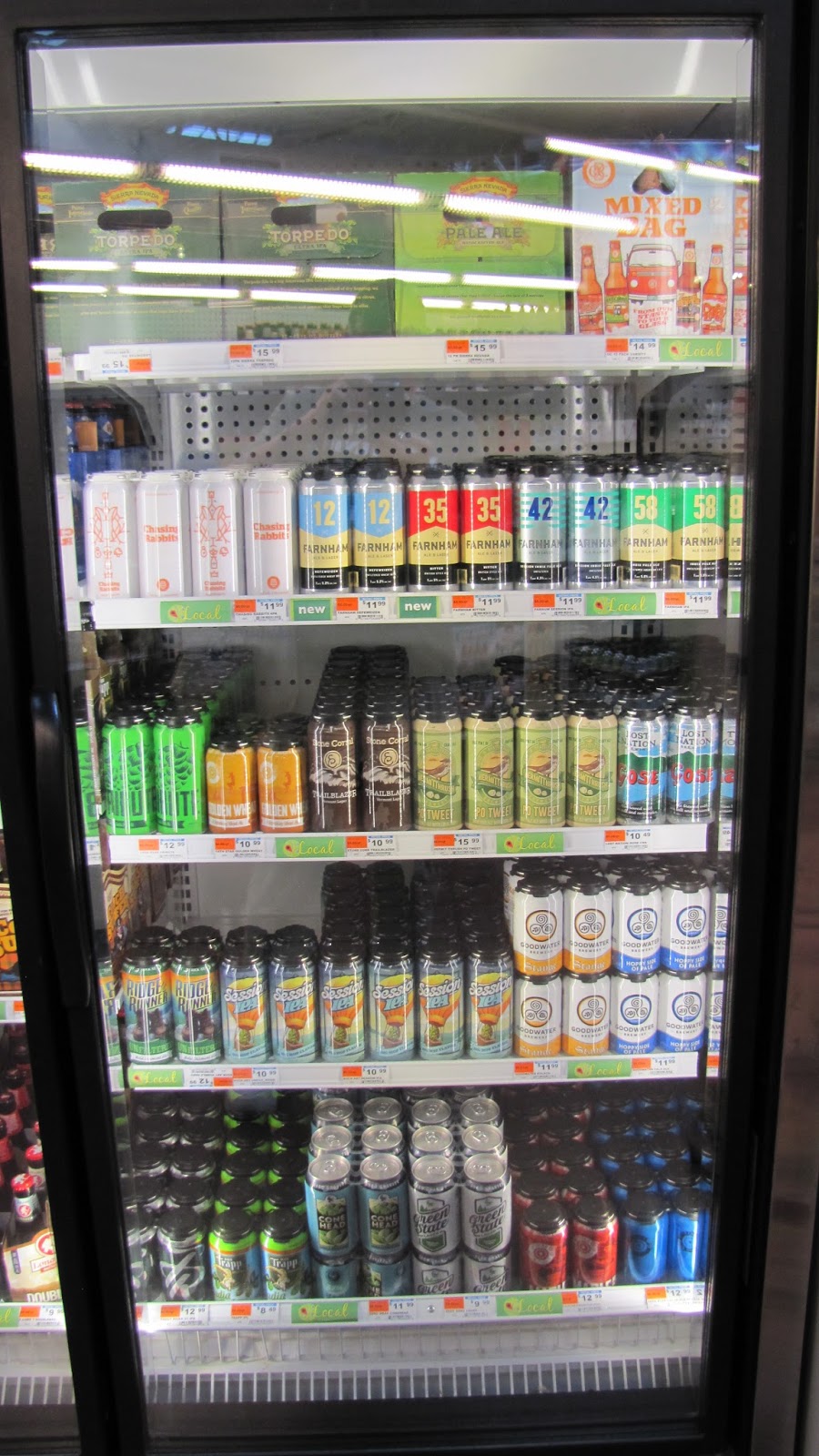 A Whole Foods clone? Perhaps. Can there be affordable food co-ops in the present age? I’d like to think so.

In the end, being owned collectively by more than 6,000 persons strikes me as preferable to chain-think.