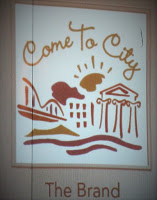 (The following has appeared previously, with an introduction from March 19, 2015, with the main section dating to September 26, 2011. This “rewind” accompanies today’s ON THE AVENUES, here.)

ON THE AVENUES FLASHBACK: Regaining consciousness in a city “coming” to? Or, the infamous Come to City marketing fiasco of 2011.

Ancient history can be instructive.

In 2010, reigning municipal kingpins Doug England and Carl Malysz hatched a scheme to bring back “together” two economic development entities (Develop New Albany and the Urban Enterprise Association) which formerly had been united by the common executive leadership of Nick Cortolillo, but split when Mike Ladd was hired as Cortolillo’s replacement, prompting insurgents within DNA to stage an unfortunate palace coup favoring their own choice as successor.

The mess was permitted to fester until England saw a chance to profit from pretending to mend it. Predictably, the results of the purported healing process egregiously violated the Hippocratic Oath, but then again, neither Doug nor Carl ever sought to avoid maiming patients in pursuit of their own ends.

The mechanism for reconciliation was to be a city of New Albany branding campaign controlled by DNA and largely financed by the UEA, for the simplest of reasons: City Hall viewed the UEA as an ATM ripe for the plucking, and by doing so, City Hall could avoid putting its own skin in the game while at the same time fluffing its DNA allies and masquerading at assisting local independent businesses. In short, the perfect political solution — with almost no chance of substantive implementation or accomplishment.

A grand reconciliation meeting was held in February, 2011, at which it was revealed that the fledgling marketing campaign’s key premise rested on an unexamined assumption that local independent businesses (mostly eateries at the time) would happily participate in what amounted to a mass Groupon, handing out discounts and coupons at their own expense because after all, who’d ever visit New Albany without being bribed to do so?

The fact that none of them had been asked or informed of this necessity triggered expressions of disbelief and annoyance, and for six months, the reconciliation project lay dormant, licking its considerable wounds. Then, in September, the Sherman Minton Bridge took ill and was closed. Hurriedly the mothballed marketing campaign was dusted off and offered as tailor-made panacea to assist with the transportation crisis.

Evidently an ad man named Tom Dudgeon had been handed the brief on the down-low, and within days, he reformatted the previous plan into something far, far worse, which was presented with much fanfare to downtown business persons at an emergency “merchant mixer” gathering at the Grand on Tuesday, September 20.

Following is my column of Monday, September 26, 2011, where we pick up the story. Almost five years have passed, and yes, the local independent business community has utterly failed to unite for the common good – if it had, then Irv Stumler and Jim Padgett would be unable to divide it with anti-Speck lies.

But as this unpleasantness clearly illustrates, New Albany’s political classes are the sole entities to profit from the division of business. City Hall and political parties cannot be trusted to facilitate unity when division suits them better. We must do it ourselves. That’s why there’ll be a restaurant association meeting today.

When will we learn from not-so-ancient history?

All the way back in February, some of us were asking pointed questions about the ballyhooed “joint venture” between Develop New Albany, City Hall and the Urban Enterprise Association.

It was a device ostensibly intended to “brand” New Albany by financing an advertising campaign geared primarily toward promoting the city’s restaurants, which were deemed the most marketable engines of the city’s revitalization.

What is the brand, who does the branding, and other necessary questions.

What’s the brand? Is it referencing price point, lifestyle, multi-cultural? What’s the definition of downtown? Who gets to play? Why this marketing firm and not that other one? Is it for independent businesses, chains or both? Are ads on bus stops in Louisville really reaching the chosen target audience? What is the chosen target audience? Why not Columbus or Indianapolis? Why not all the people in Floyd County who still don’t know downtown exists?

The campaign’s general theme, intent and parameters were unveiled at the YMCA on February 23, and I was there at the invitation of Paul Kiger. The reaction was muted, with insiders understandably jubilant and outsiders more analytical. Paul had requested that I ask hard questions, and I did. Overnight, my stock plunged accordingly.

Afterward, with the balloons and bunting safely packed away, almost seven months of silence ensued. Only last week, at an informal Merchant Mixer meeting called to discuss responses to challenges posed by the Sherman Minton Bridge closure, was the updated campaign described by the Dudgeon firm’s founder, accompanied by a new sense of inevitability and urgency (paraphrased):
The campaign is finished, the bridge situation demands that we implement it now, here are your marching orders, and we can talk about the details later.

Note that during the plan’s elongated seven-month gestation period, there was neither public discussion nor participation by the business community – especially those restaurants expected to carry the ball. As such, it is no wonder the discussion at last Tuesday’s Merchant Mixer meeting became somewhat agitated.

However, I find considerable hope in Tuesday’s final outcome, because something unexpected happened. A motion was offered. Another motion followed, and there was discussion and an amendment. An actual vote was held, and those in attendance overwhelmingly rejected the ridiculous “Come To City” portion of Dudgeon’s plan, favoring instead a temporary compromise using the DNA visual on modified billboards.

Do you see it?

This hitherto unstructured group of merchants entered into a process of debate, and by doing so tacitly made an abrupt passage from non-binding to semi-formality – a veritable union of business owners, as it were, and a transitional big bang, because the cliques-that-be did not challenge the decision of the collective. That’s huge.

Thus, even as former downtown business owner Don Preston flailed while mouthing his bizarre, Caesaresque, primal fear of “mob” democracy, grassroots democracy was emerging before his wide shut eyes. Liberated from the committee’s closed back room, with information openly on the table, the city’s business owning shareholders convincingly rejected a flawed, top-down idea and offered an alternative.

For at least one shining moment, the city’s historic boil was lanced.

Can we be honest?

This “joint venture” was a shotgun marriage from the very start. The impetus to work “together” did not evolve from the ground up, but was imposed from the top (City Hall) down.

Yet, it might have worked had the mayor and his sidekicks actually cared to engage in negotiation aimed at consensus and enlightenment, but unfortunately the task of persuasion was delegated from mayor to deputy, and then to the same tired DNA operatives as always, ensuring the UEA’s role in conceptualizing the campaign remained miniscule, while its checkbook stayed within easy lunging distance when the bills came due.

To this day, no one outside a small circle of the anointed knows why the Dudgeon ad agency was chosen. There is no explanation for the secrecy involved. No City Hall official bothered to remain at last week’s meeting to offer insight. Rather, what we know is that once again, politicized methodology usurped possibility.

In February, the News and Tribune’s article ended like this:

Mayor Doug England said cross promotion is vital to sustaining the recent progress made downtown, and the joint venture is an opportunity to continue the growth. “It won’t work without everybody’s cooperation,” he said.

But the congenital absence of mechanisms purpose-built to encourage inclusiveness and participation thwarts cooperation, doesn’t it?

If you design a top-down process to achieve pre-determined outcomes (or in New Albany’s case, non-outcomes), that’s generally what will come out the other end of the meat grinder. Consequently, the joint marketing campaign now resembles little more than the faces of its handful of entrenched designers, seated before a mirror, looking back at themselves.

It breaks no new ground, nor offers a younger demographic any reason for future excitement. It is a testament both to the enduring prevalence of human design flaws, and the sheer, numbing and destructive nepotism for which the current administration chiefly will be remembered, and before the inevitable rejoinder is squealed: Contrary to popular belief, nepotism need not be remunerable to be toxic and capable of suppressing necessary public participation.

And yet, it is my sincere hope that with last week’s brief and transformative moment, New Albany’s small business persons may see a flickering light. Top-down is superfluous when the grassroots are mobilized, and now, more than ever, small business has the means to come together and take a seat at the table.