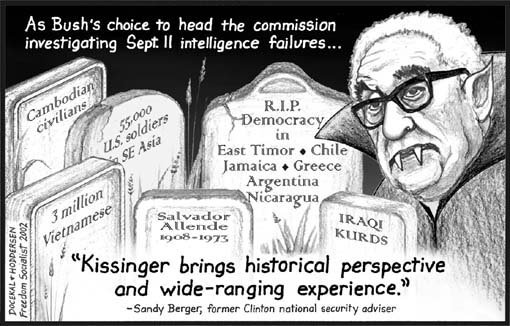 At this point, I may write in my own name.

If Hillary Clinton Seeks (or Accepts) an Endorsement from Henry Kissinger, She’s Lost My Vote, by Charles P. Pierce (Esquire)

… So I can say this full in the knowledge that what I say will not have the slightest effect on the outcome of the presidential election. But it is not negotiable.

If Hillary Clinton actively seeks, or publicly accepts, the endorsement of Henry Kissinger, I will vote for Gary Johnson and Bill Weld on November 8.

(Jill Stein, you might’ve been a contender, but going off to Red Square to talk about Vladimir Putin and human rights? Being an honored guest of a Russian propaganda channel? I don’t think so.)

Kissinger is a bridge too far. He is responsible for more unnecessary deaths than any official of a putative Western democracy since the days when Lord John Russell was starving the Irish, if not the days when President Andy Jackson was inaugurating the genocide of the Cherokee. He should be coughing his life away as an inmate at The Hague, not whispering in the ears of a putatively progressive Democratic presidential candidate. I can tolerate (somewhat) the notion of her reaching out to the rest of the wax museum there, but Kissinger is a monster too far. He is my line in the sand. I can choose who I endorse to lead my country, a blessing that Henry Kissinger worked his whole career to deny to too many people …