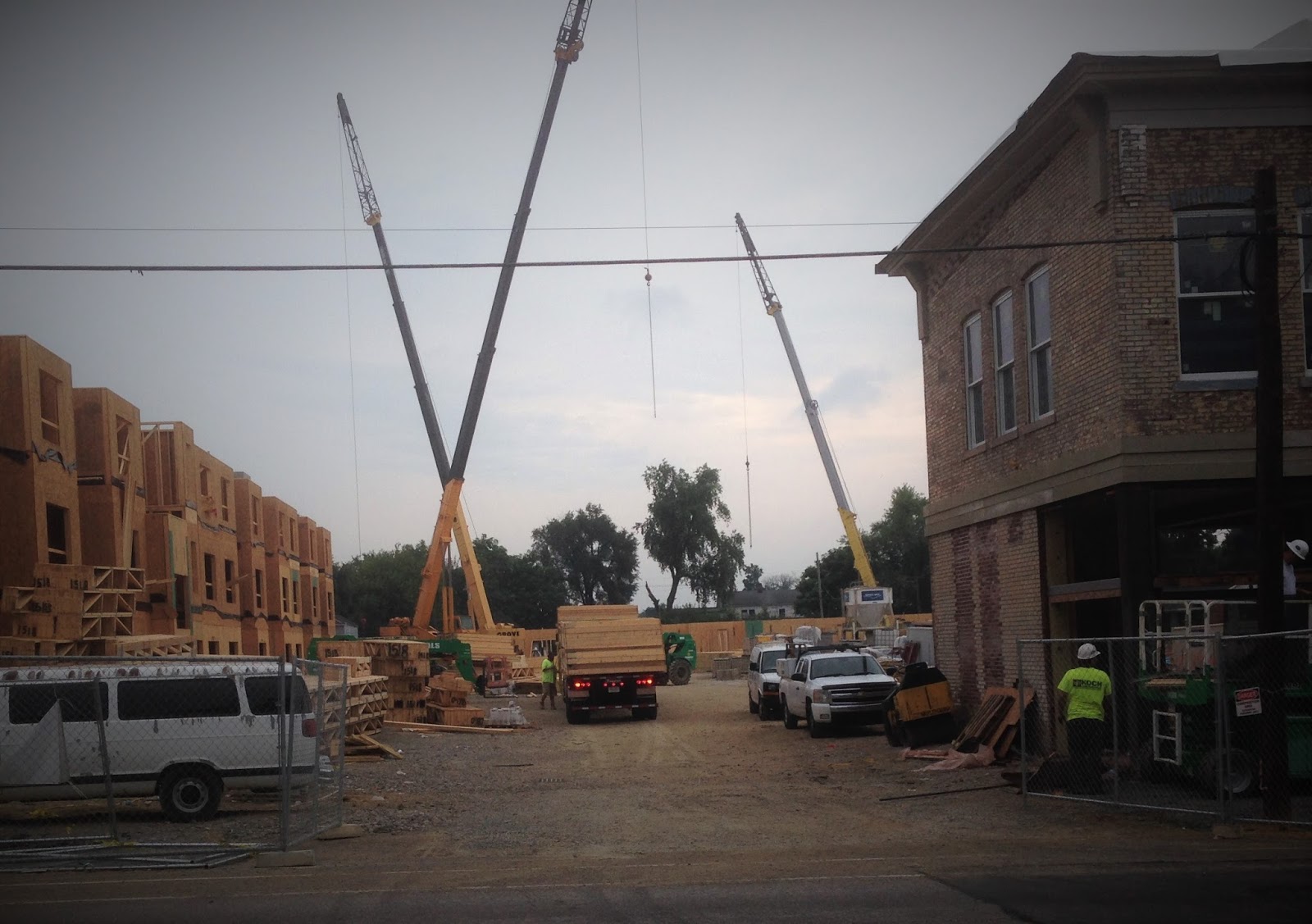 Friday morning, I was walking west on Elm Street. Just steps away from Pearl Street, my ears registered the roar of an approaching heavy truck on one-way Elm. Glancing over, I saw a long flatbed trailer loaded with stacks of wood marked “4th Floor.”

Having observed the ongoing construction of the Break Wind Lofts at Duggins Flats, I reasoned the lumber was headed there, thought nothing more, and continued walking.

Now strolling south on one-way Pearl Street, I crossed one-way Spring Street, then went east on one-way Market Street, pausing only briefly to greet the morning denizens of the Art Store. At 3rd Street, I bore left and north, which brought me to one-way Spring, a right turn, and the final eastward segment of my walk, back to the house.

As I crossed 4th Street walking east, my ears registered the roar of an approaching heavy truck, on one-way Spring coming toward me, roughly adjacent to Destinations Booksellers.

From the time I’d seen the truck it at Elm and Pearl, just after the driver came off the interstate, perhaps 8 – 10 minutes had elapsed. Apparently he’d been compelled to travel far to the east on one-way Elm in order to double back on one-way Spring and reach his entry point at the Break Wind staging yard between 4th and 5th.

He would have even if Elm wasn’t blocked at 5th.*

If it were a two-way street grid, he might have turned right from Elm onto 4th, then left on Spring, cutting quite a few blocks traveled from his trip.

The point to this digression has nothing to do with this particular truck and its epic journey to reach the first instance in the city’s history of sewer tap-in waivers as incentive to a for-profit developer.

Rather, it’s to illustrate the sheer wastefulness of our one-way street grid, because every single day — not every now and then — drivers must add distance to their journeye owing to one-way streets, when two-way streets would make so many of these journeys more direct, saving both fuel and time.

It’s the sort of fact-based thought process you’d imagine resonating in the minds of supposedly rational community pillars, and that it does not do so tells us all we need to know about their crippling prejudices.

It isn’t hard for me to imagine their reaction were they to read what I’ve written here.

You walked all that way?

Don’t you have a car?

Lynchburg, Virginia offers this useful overview of two-way street reconversion. Even a child of five would understand it, so can someone fetch a child of five? 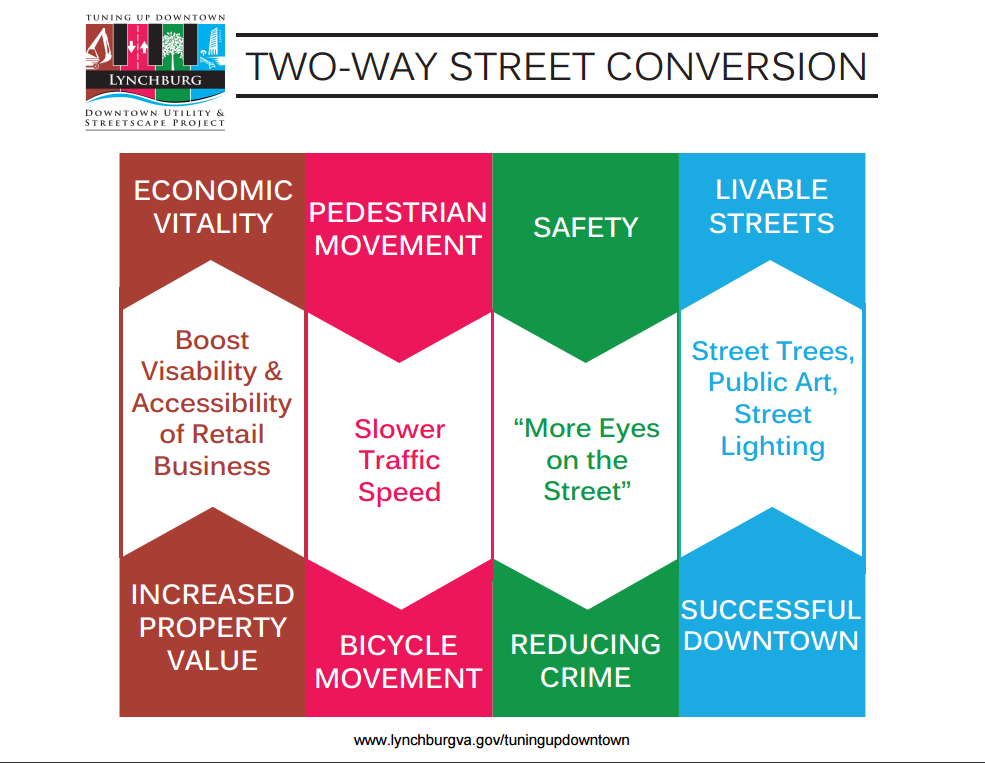 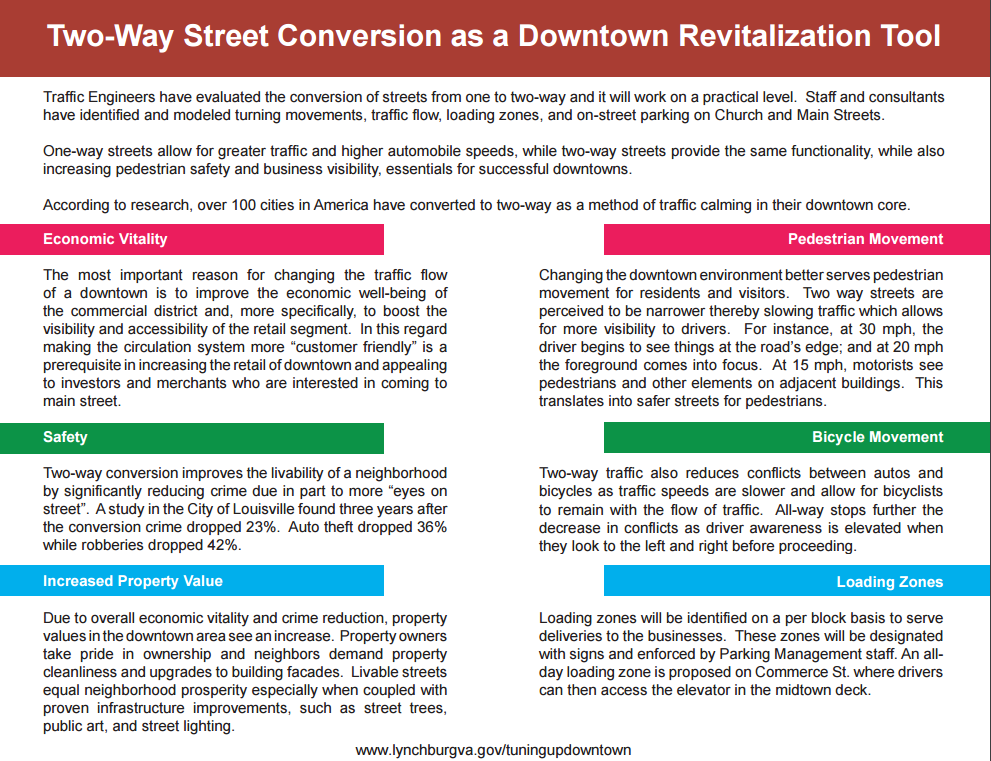 * Sentence reinserted. I think the analogy holds irrespective of the pit at 5th & Elm, but I should have made note of it.