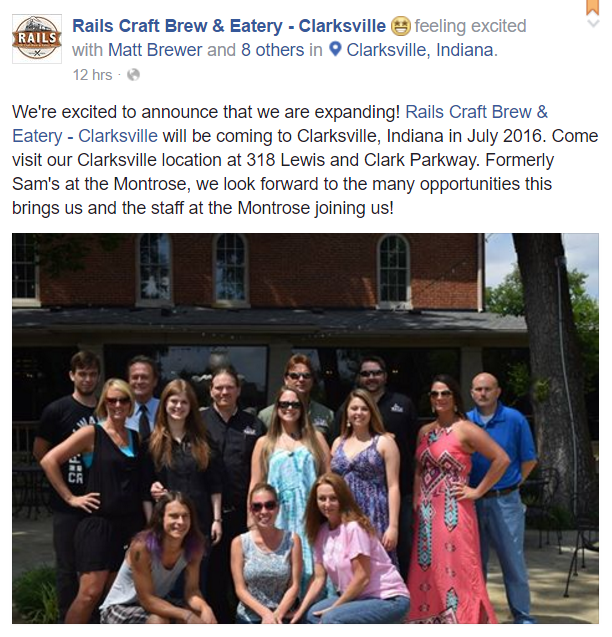 The second location of Rails Craft Brew & Eatery will take over the Sam’s at the Montrose space. Rails is from Seymour, and as with Flat12 Bierwerks before it, I think you’ll see more “northern” independent food and drink businesses opening branches hereabouts.

My cherished hope always has been for Three Floyds Brewing Company to be one of them. A boy can dream.

Meanwhile, all the best to Sam Anderson at his Highlander Point shop. This might well be good thinking on the part of all involved.

… Sam Anderson, who owns the building and operated Sam’s at the Montrose, said the move makes sense. Sam’s at the Montrose was open five days a week since opening 2 1/2 years ago after a fire destroyed Sam’s Food & Spirits in New Albany in December 2013. Anderson said his Sam’s restaurant at Highlander Point will remain open seven days a week and continue its catering operation. The Highlander Point restaurant has been open since 1991.

“This is a good thing. They will be open seven days a week and this will allow us to focus on one location in Floyds Knobs,” Anderson said. “They are turning [Montrose building] into more of a destination. It’s time to let someone else drive the boat for a while.”