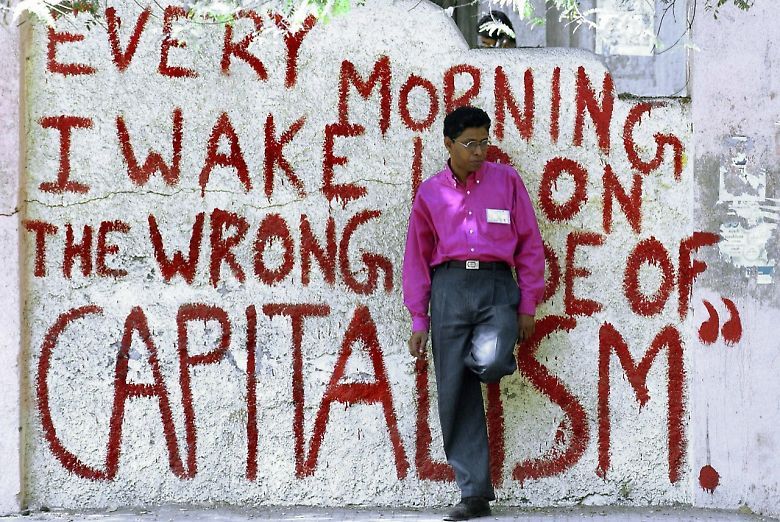 Gun violence is proof that trickle down theory works. It’s the only part of it that works, but it works.
— Jeff Gillenwater

Keep peeling away the layers, go past irrelevant debates about weaponry and Muslims, and get down to the heart of the matter.

The Structural Genocide That Is Capitalism, by Javier Sethness (Truthout)

Garry Leech, an author who had previously penned a book on the FARC insurgency in Colombia (2011), has assembled a forceful denunciation of the status quo with Capitalism: A Structural Genocide. In essence, he argues cogently in this work that the devastating structural violence experienced by societies subjected to the rule of capital since its historical emergence – and that particularly felt by the world’s presently impoverished social majorities – is, instead of being an aberration or distortion of market imperatives, central and inherent to the division of society along class lines and the enthronement of private property. Even a cursory examination of the depth of human suffering perpetuated historically and contemporarily by the hegemony of capital should lead disinterested observers to agree with Leech that the catastrophic scale of violence for which this system is responsible can be considered nothing less than genocidal, however shocking such a conclusion might prove to be.

The pervasiveness of violence in America can be easily grasped via 10 minutes of Googling. Not that I’d want Bob Caesar thinking of me as anti-establishment, or anything quite so damaging to my social status.

It’s like this: Garbage in, garbage out. A system founded on violence, violence as a chief by-product.

The attack on a gay club in Orlando on Sunday, the worst mass shooting in U.S. history, is not an isolated crime.

Violence Against Women in the United States: Statistics (NOW)

Despite the fact that advocacy groups like NOW have worked for over three decades to halt the epidemic of gender-based violence and sexual assault, the numbers are still shocking.

Black History Month in 2016 comes at a time of escalated violence against African Americans — much of it involving police — that recalls the troubled times of the late 1960s.

Racial violence against Native Americans has drawn attention from the federal government twice in recent years, but many hate crimes still seem to get a pass.

Children are suffering from a hidden epidemic of child abuse and neglect. It’s a widespread war against our children that we have the power to stop, and understanding the issue is the first step. Just how bad is the issue of child abuse in the United States?

The American Humanist Association created this infographic which shows some of the ways in which atheists are socially and legally discriminated against.

That’s enough for starters, isn’t it?