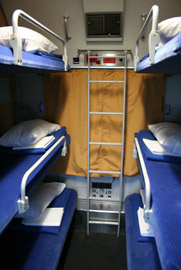 This is a depressing article.

My early European travels were immeasurably enhanced by understanding and utilizing the principle of overnight travel on sleeper trains. Couchettes, or train cabins converted into six horizontal sleeping spaces, were a wonderful and affordable way to meet people from all walks of life.

France is set to say au revoir to the couchette, as the country’s department of transport prepares to withdraw overnight train routes from Paris.

The French government, which owns the national rail operator SNCF, has said sleeper trains are too expensive to run; it has withdrawn financial support and invited bids to run the services. But unless a proposal is received by July 1 all but three of the dozen or so overnight services will be axed. The only remaining Intercités de Nuit will be from Paris to Briancon, Rodez and Latour de Carol, routes deemed socially necessary, according to rail website The Man in Seat Sixty-one.

The news is a further nail in the coffin for sleeper trains across Europe, and a major blow for any travellers trying to reduce their carbon emissions. Overnight services between France and Germany hit the buffers in December 2014 when Deutsche Bahn, the German rail provider, closed its night service between Paris and Berlin, Hamburg and Munich.

A year earlier night time connections between Paris and Madrid and Barcelona, run jointly by SNCF and the Spanish rail provider Renfe, were withdrawn when the high speed TGV service between the French capital and Barcelona was introduced.