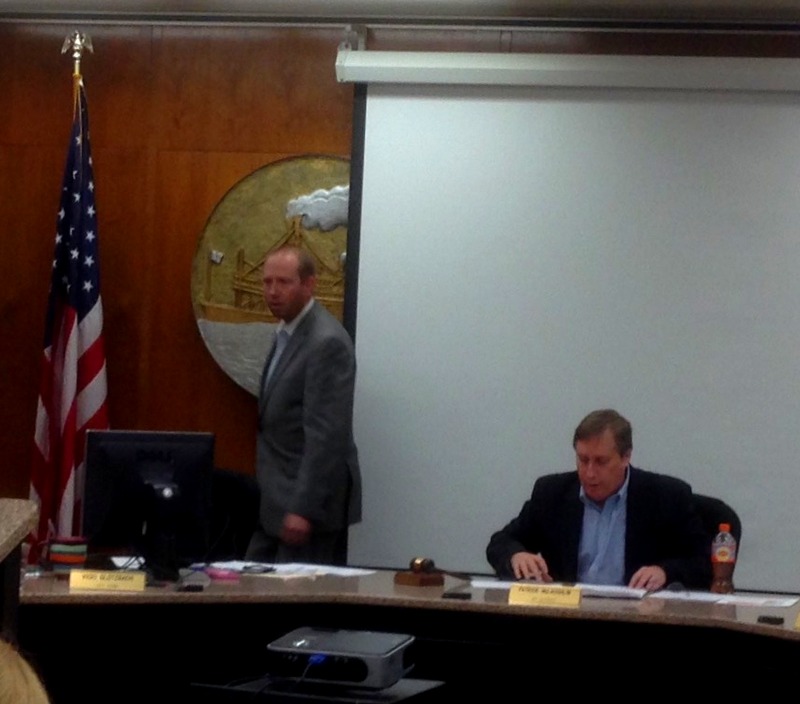 As time merits, there’ll be more to say about last evening’s council epic, but for the moment a few plain facts should suffice.

On Monday morning, for the first time in 50 months as mayor, Mayor Jeff Gahan timorously placed a quivering toe in the water, and the minimum required number of chips on the table, and released an awkward statement in support of rental property registration, inspection and enforcement — something he had studiously avoided mentioning throughout his 2015 campaign for re-election.

Once the council meeting began, shepherds in far-off Patagonia felt the seismic shock when Pat Harrison, inveterate opponent of such intrusive measures, not only endorsed the rental property ordinance and appealed to the many rental owners in the room to unite around it, but refrained from using the word “Gestapo” for the first time in living memory.

The rental owners responded by gazing upon the figure of Harrison much in the fashion of Trump rally attendees when the lone minority protester dares speak apostasy aloud, and set about angrily voicing their perennial objections to being compelled to follow the same general regulations as the remainder of the city’s business community.

An hour and a half later, after a brief diversion to New Albany’s never-ending stormwater drainage problems (also never mentioned during last year’s campaign), it came time for the mayor to speak.

Of course, such was the epochal importance of the occasion — Gahan referred to the rental ordinance as a “must” —  that the mayor yet again failed to attend, thus missing the chance to confront dissenting property owners face to face, and sending customary surrogate Mike Hall in his stead. Hall read the mayor’s statement, which he likely wrote in the first place. Proponents surely felt deflated. If not now, when?

The council’s own discussion began, with Dan Coffey predictably tossing red meat to the crowd, Scott Blair making gurgling sounds about spread sheets, and Greg Phipps defending his (read: the mayor’s) ordinance with the common sense suggestion that as with other businesses, if they’re not profitable, perhaps the business owner should seek a new line of work.

Subsequently, it became clear why Gahan bothered to so much as commission a statement on his strange new “New Albany City Hall” web site, even if deigning to appear before council and citizens constituted an onerous chore.

It’s because the council’s new math has deprived Gahan of painless, easy victory when a vote cannot be evaded. For 12 years, there have been eight Democrats and one Republican. During Gahan’s first term, those eight Democrats were as pliable on the mayor’s behalf as the Supreme Soviet was for Uncle Joe or Comrade Nikita. For four years, Gahan sought to rule by closeted writ, but always could rely upon a servile council rubber stamp when desired … when responsibility needed to be shared.

Those days are gone. Blair and Coffey comprise a vacuous, unprincipled “you-pay, we-vote” rump that should not be honored by use of the word “independent.” There are three Republicans, and Al Knable is a particularly prepared and formidable seeker of bipartisan input.

This leaves only four reliable DemoDisneyDixiecrats, none of whom are natural leaders, all of whom formed a rote line when Gahan finally ventured from his down-low bunker with yesterday’s public statement …  except that it takes five votes.

Phipps didn’t have them.

Consequently, the Thanksgiving turkey (the rental ordinance, not Duggins) set about being carved. The result was a compromise: The registration component was separated from the teeth of inspection and enforcement, and this rump was approved unanimously for the first two readings. Inspection and enforcement sections now will return to committee, where the teeth will be vigorously filed down to  mimic gently sloping, loosely fitted dentures.

That even this much was approved probably owes to the many rental property owners conceding openly to living elsewhere, from Scott County, Indiana to Shepherdsville, Kentucky.

After all, foreigners don’t vote.

In the end, Monday night represented much ado about precious little. However, something a bit different has been born. In 2015, Gahan lost 13 points off his mayoral margin, and when Coffey went rogue, the council dynamic shifted. Will the mayor accede to Coffey’s terms and grease him back inside the tent, where he can resume pissing out of it from the inside? Will he bite his tongue and negotiate with scrubbed and perfumed corporate fetishist Blair? Or, will City Hall double down on government by appointed committee, i.e., redevelopment and the board of works?

That reminds me: Gin.