ON THE AVENUES: This is Dan Coffey, New Albany’s quintessential Democrat.

Dan Coffey is a Democrat.

Go and paste a photo of Coffey into Google Images, and the magical search engine yields various glamour shots of none other than Governor Mike Pence.*

But as Coffey surely would remind you in his very best caterwauling drawl, “that Ol’ Man Goggle ain’t from HERE, is he?”

And HERE, in New Albany and Floyd County, reverting to the curiously deceptive dialect spoken by those who have their obscure reasons for not being publicly identified as Republican in a benighted place where only two options for political affiliation are permitted, Coffey remains a card-carrying, fully sanctioned and purely customary Democrat.

In fact it says so, right there, at the Floyd County Democratic Party’s web site. 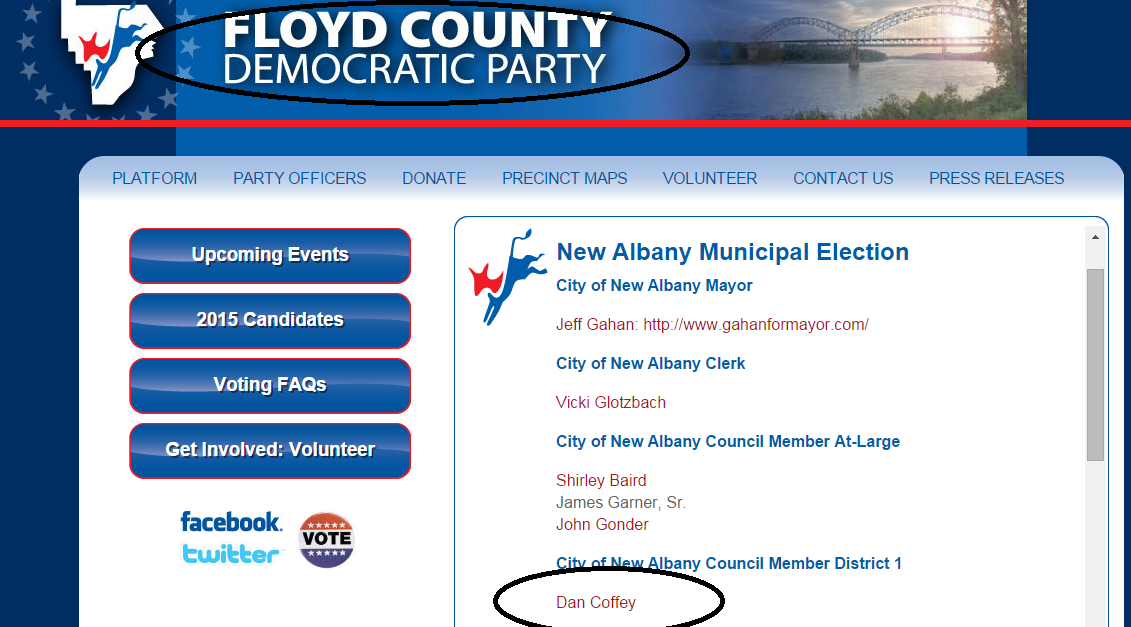 Dan Coffey is a Democrat.

He also is an unreconstructed homophobe, a serial bully, and a perennial opportunist. He has occupied a council seat since the year 2000, and during all that time, while amassing a record of non-achievement notable even by New Albany’s subterranean standards, he never once has troubled himself with deep thoughts about prayers and invocations, apart from repeating them by rote, mindlessly, along with everyone else in the council chamber.

Then along came “them people” asking for their rights, and all of a sudden, Coffey sprang forward to defend the faith from these godless heathens, of whom I surely must be numbered as one. For reason of my atheism, perhaps my testimony is unreliable to some. However, as it pertains to Coffey’s most recent council displays or righteousness, you needn’t take my heretical word for it.

The following forceful and passionate passage was written by a certified believer, the Rev. John Manzo of St. Marks United Church of Christ, and posted at Facebook. Seems Coffey might not be speaking on behalf of all the city’s Christians.

The other night God got mocked at the City Council meeting.


Councilman Dan Coffey swore at another member of the Council by calling him a “lying piece of (expletive)” during a debate over public prayer on Monday.


Later, Mr. Coffey said, “No, I didn’t bring this up to curry favor,” Coffey said, hitting his hand against the council’s desk. “I brought it up because every time you turned around, there was something coming up about gays, lesbians, transvestites and making sure they had their rights.”


The council then considered an amendment that would’ve allowed members only to pray, give an inspirational message, or to skip their turn in the rotation.


“If someone chooses to say a prayer, that’s fine,” Councilman Greg Phipps said. “I they choose to read an inspirational poem, that’s fine.”


“I can hear it now, ‘tiptoe through tulips,'” Coffey replied in reference to a gay person presenting a prayer or a devotional reading.


The problem with what Mr. Coffey did is that he was acting like he was protecting God and protecting religion. He wasn’t. He was being offensive and saying he was doing this in God’s name. That mocks God. As a pastor of a church in downtown New Albany I find his actions deeply offensive. He made a mockery of those who us who take our faith seriously and pray. My hope and prayer is that he takes time at the next Council meeting to apologize to his colleagues for his offensive behavior, but most of all, to the people of faith for his vulgar mockery of God.

Hmm. Did I mention that Coffey is a Democrat?

This Democrat, when handed the gift of tailor-made grandstanding, abruptly coiled like a copperhead and stung like a Pharisee, professing hitherto unwitnessed allegiance to points of order, and volunteering to explicate obscure passages of Constitutional law which have confused genuine scholars since before the ink was dry on the original document.

Coffey, a Democrat, knew fully well the camera was focused on him, and so he was suitably explicit for the viewing audience at home, because he no longer can suppress his revulsion at the inexorable advance of the Sodomites.

He’s a Democrat, and he knows that as a Democrat in New Albany and Floyd County, he is perfectly free to say and believe and do anything, or nothing, however egregious, nasty and untruthful, because there’ll always be a fellow “Democrat” in need of the sin-eating services of a small-pond operative utterly devoid of scruples or ethical sensibility.

Dan Coffey’s been HERE his whole life, and he merely shrugs. How can it be a crime if there isn’t any punishment … ever?

It has been ten days since this episode of KoffeyKulturKampf was aired on the boob tube, as recounted evenly and accurately by Pastor Manzo, who has been joined by the LGBT community and numerous other fair-minded individuals in expressing revulsion.

Our leaders tend to be Democrats, just like Dan Coffey, and they … are silent.

The Floyd County Democratic Party has said absolutely nothing. Mayor Jeff Gahan, like Coffey a Democrat, and moreover, quite content to deploy Coffey as his dull, blunt Sancho Panza, to be wielded in pursuit of his and the party’s monetization aims, has remained mum.

Both party and mayor invite you to go swimming, and forget about the rest.

Of Coffey’s city council colleagues, six of whom are Democrats, only one has referred to the landmark council evening publicly, and yet  John Gonder’s welcomed critique was mostly oblique, as usual, and his brave but doomed loyalty to a political party – to his own Democratic Party – itself largely in connivance with Coffey’s and Gahan’s despicable targeting of Gonder for defeat in the November election, is elegiac, fated and shaded with melancholy.

Four years ago, Jeff Gahan’s stated aim in seeking the office of mayor was to somehow alchemize New Albany into a “fundamentally” better municipality.

As Coffey’s recent human rights slurs abundantly illustrate, this has not occurred. In fact, it has not begun.

Fundamentals are basic, underlying, core standards. They must exist to serve as the foundation for what follows. They are the procedures and protocols defining more universal matters like human and civil rights, but also those daily markers wrongly viewed by many as mundane, including topics like the demeanor, practices and expectations of public officials and employees, and their bodies, boards and commissions.

Dan Coffey is a Democrat, and his peers would rather enjoy weekly colonoscopies than call his bluff.

There are no fundamental guidelines available for needed discipline, save one: The ballot box, except that Coffey had no challengers in his party’s primary in May; the GOP apparently refuses to run a candidate against him; and no independent alternative has emerged.

Might as well – and a lean, mean Democrat at that, mercifully stripped of any platform compliance obligations or other burdensome adornments resembling anything remotely democratic, with upper- and lower-case meaningless, and thus completely interchangeable.

Apart from the many citizens Coffey has openly denounced, he also has humiliated his nominal political party, his cowering patron of a mayor, and the entire city, for good measure. Each and every one of us looks bad at the present time.

And Dan Coffey, the Democrat, is winning.

He is winning by default.

* When I pasted this into Google Images …

June 4: ON THE AVENUES: Dan Coffey speaks for Jeff Gahan and the Democratic Party … unless they say otherwise.

May 28: ON THE AVENUES: The last of the summer beer.

May 21: ON THE AVENUES REWOUND: “I Just Want to Know, Can I Park Here Somewhere?”

May 14: ON THE AVENUES: Take this cult of personality and shove it.

May 7: ON THE AVENUES: In Havel I trust.

April 30: ON THE AVENUES: Until philosophers become kings.