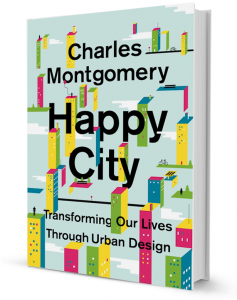 Grazing amid the free market of ideas, I’ve often come to rest at Walkable City.

Maybe it’s time to indulge in Happy City, too. The book was published more than a year ago, and I’m not certain why I haven’t read it, although an excerpt was referenced in late 2013: Today’s reading for CM Blair: “Wal-Mart: An economic cancer on our cities.”

You can lead a banker to information, but you can’t always make him read. Let’s hope this is an exception. Scott: When you’re finished, can you pass on this link to David Duggins? I think he needs to read it, too. Thanks.

Thanks to BH for the prompt. It will be obtained soon.

… The value of connectedness to those who live in cities is anything but a new principle. Aristotle preached it in his writing on the Greek polis 2,400 years ago. Jane Jacobs re-emphasized it in talking about her New York neighborhood, Greenwich Village, in the early 1960s. But past writers on this subject have mainly praised existing communities they find conducive to human well-being. Montgomery is all about creating new ones.