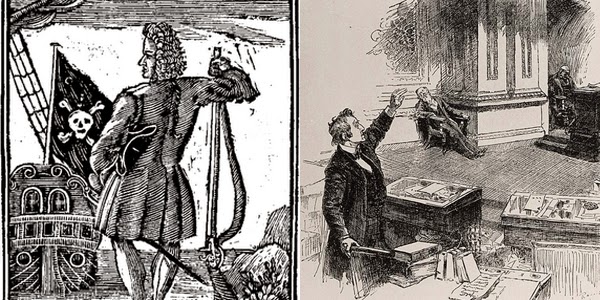 It’s all about hoisting a black flag.

Why did Pirates Fly the Jolly Roger?, by Krystal D’Costa (Scientific American)

The “pirate brand” has long been tied to the skull and crossbones—the Jolly Roger—as a symbol of terror on the high seas. A 2011 article in The New York Times hails the ominous design as a magnificent exercise in collective hybrid branding, noting that economics drove pirates to adopt a version of this particular symbol to facilitate their intent to plunder. It’s a fascinating discussion on the efficiency and power that good branding can deliver, but it overlooks the ways in which the power of the symbol as we recognize it draws in part in the acceptance and manipulation of the image by others.

But who knew the origins of the filibuster in piracy?

Meet the First Filibusters: The 16th and 17th Century Pirates of the Caribbean, by Garance Franke-Ruta (The Atlantic)

… The original filibusters were pirates of the Caribbean, and the contemporary Senate procedure continues to bear traces of the word’s origins in the disruptive and lawless practices of the privateers who boosted the goods of ships traveling under Spanish sail.