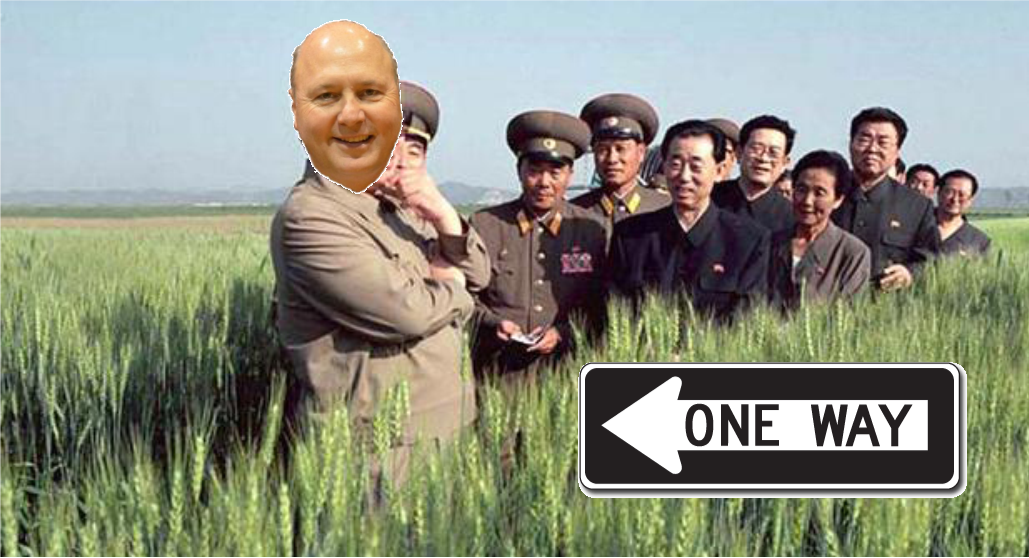 2. the intervening substance through which impressions are conveyed to the senses or a force acts on objects at a distance … “radio communication needs no physical medium between the two stations”

Mayor Gahan is committed to making our downtown streets more friendly to drivers and walkers. Three concepts are being developed to address this issue. What makes it great is that the federal government is going to cover 80% of the cost. Soon we will have options to improve the way we move, which will include more 2-way streets, better signage, and safer crossings. I’m sure downtown residents and businesses will be pleased with the results. Two additional items must be considered before moving forward: 1) the cost of the project. 2) There must be a plan to allow truck in and out of downtown.

Anyone with a bucket? This paragraph comes perilously close to making me physically ill.

Note the carefully chosen, quasi-Orwellian code words. These constitute the shameful fine print in the sausage factory’s standard disclaimer: We may have implied “all meat,” but it all depends on what the definition of political cowardice is.

“Drivers” naturally come first, before “walkers.” What was a pristine street network plan submitted by the nation’s preeminent expert now is being subdivided into three nebulous and undisclosed “concepts.” These unidentified “options” are coming “soon,” although we’re not told when that might be — but it’s already known that 18 months is the duration of “soon” as minted by our forever pliant Bored of Works. We’re informed that we’ll be pleased with “results,” which of course are not defined. And, of course, we must “allow” trucks to operate, a caveat which is entirely and ridiculously redundant owing to the fact that no previous plan, including Jeff Speck’s, ever once suggested barring them.

Worst of all, the words in Greg Phipps’ posting don’t even sound like his. He typically does not write this badly. Rather, they read like the prepared script from videos in which the hostages insist they’re being treated well. Either way, they’re the sound of capitulation.

Yet again, someone other than the mayor is lecturing us about the mayor’s “real” intentions. But not until the voice we hear is Jeff Gahan’s … not until Gahan takes ownership of these wonderful street grid commitments … not until he explains these and other matters himself, aloud, unequivocally and for attribution when public questions are answered by the man himself, should we relax our fully justified skepticism. It’s warm and fuzzy that his fan club seeks to speak for him, but it isn’t enough. He must speak for himself — for once in his life.

It is disappointing that once again, Phipps has opted for being a willing cog in the very same political machine he once decried. Following is a Facebook comment from a Phipps constituent.

F#*k the trucks, what about the actual people that live in this city, the people that pay taxes so these trucks can ruin our landscapes, can run over our beloved pets, that rattle our windows, that break our car windows with crap falling out their truck beds, that commit crimes that the city overlooks because it fills their pockets. I’m tired of paying fines for not moving my car so the weekly street sweeper can pick up the ashes of these trucks but yet will not get a speeding ticket on Spring Street. We need answers, Mr. Gahan.

Those answers won’t be coming from the mayor, will they?