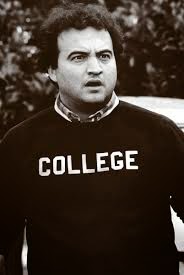 ON THE AVENUES: It’s just like when the Germans bombed Pearl Harbor.

A recent, pointless exercise on social media asks us to name a movie we’ve seen one hundred times.

For me, it’s a baffling question, seeing as amid the breathless ubiquity of movies and film culture in America, I may be the only living citizen desperately attempting to suppress a yawn.

Insofar as I took time to watch movies at all in 2014, The Grand Budapest Hotel stands out as particularly enjoyable. There may have been a half-dozen or so others. Granted, I enjoy certain genres, primarily foreign films and documentaries, but that’s about it.

While I’ve listened many hundreds of times to my favorite albums, it’s almost unimaginable for me to have watched a movie more than one or twice. However, there are exceptions, and the one springing immediately to mind – perhaps even surpassing the century mark — is National Lampoon’s Animal House.

Before I’m upbraided for lowbrow tendencies, permit me to note that no less an authority as Dr. Murray Sperber, an internationally respected academician best known as Coach Bob Knight’s one-time arch-nemesis on the campus of Indiana University, has looked to Animal House for deeper social meaning.

Specifically, Sperber charged that for decades following the 1978 release of Animal House, Big Time Universities knowingly enticed students not with learning, but with the twin recreational lures of party culture and NCAA athletics, hence his “Beer and Circus” aphorism.

Consciously echoing ancient Rome, it was a ploy by which students were distracted from realizing that their chosen institutions had failed to provide them with a quality undergraduate education.

Major universities, coveting lucrative governmental and corporate funding that rewarded success in higher-level academic research, employed the best, highest-paid researchers, whose research load precluded them from teaching undergraduates, who in turn were increasingly in need of intensive, remedial resources not applicable to top-flight research programs.

The cash flow of undergraduate tuition funds remained essential to the whole enterprise, and so undergraduates were shunted into mass lecture halls holding hundreds of students, taking classes commonly taught by graduate assistants or part-time professors. In return for this depersonalized inadequacy, undergraduates were given enjoyable diversions, i.e., cheap swill and spectator sports.

The totemic, drunken, decidedly non-academic John “Bluto” Belushi famously wore a sweatshirt emblazoned with the generic term “College” — and what could be more collegiate than clocking out Thursday, drinking through the weekend, attending the big game against Tech, partying into Sunday (possibly even Monday) and barely considering one’s ostensible reason for being on campus in the first place until some point on Tuesday – at which time the cycle was ready to begin anew.

Animal House single-handedly created a cultural facet so destructively injurious that even now, three decades later, whole sub-cultures of reformers and do-gooders spend lucrative careers seeking to eradicate the menace of fraternity drinking, even as the money in big-time college sports spirals completely out of control (see Arena, Yum!).

C’mon — can your favorite movie do that? It shows that I sure know how to pick ‘em.

D-Day: War’s over, man. Wormer dropped the big one.

Bluto: Over? Did you say “over”? Nothing is over until we decide it is! Was it over when the Germans bombed Pearl Harbor? Hell no!

Bluto: And it ain’t over now. ‘Cause when the goin’ gets tough… [thinks hard] the tough get goin’! Who’s with me? Let’s go! [runs out, alone; then returns] What the fuck happened to the Delta I used to know? Where’s the spirit? Where’s the guts, huh? “Ooh, we’re afraid to go with you Bluto, we might get in trouble.” Well just kiss my ass from now on! Not me! I’m not gonna take this. Wormer, he’s a dead man! Marmalard, dead! Niedermeyer –

Bluto: We’re just the guys to do it.

This most inspirational of cinematic passages, at least in my lifetime, occurred to me earlier in the week when it was reported that Jeff Gahan, New Albany’s hermetic mayoral incumbent, has amassed a $95,000 war chest going into municipal elections this year.

That’s big money for a small city. Is the race already over?

It might be interesting eventually to study the itemized list, although the total shouldn’t surprise anyone. New Albany’s budget has increased by strangely untold millions since Gahan took office, and the public trough has been tapped early and often for various construction and patronage projects. This City Hall clearly performs triage at every decision-making juncture: If it can’t be monetized to ensure the requisitely metaphorical post-coital-cash-stuffed handshakes, it tends not to happen.

Probably this is the primary reason for the ongoing lack of traction for walkability and street reform. People merely walking and biking provide far less lubrication for future political campaigns than automotive interests – or fear mongers. The usual suspects are baffled at unpredictable paybacks, hence feet are dragged as they await the proper formula for the ritual wetting of beaks.

For an independent mayoral candidate like me, Gahan’s surfeit of cash has the potential to be daunting. As yet, I have no campaign funds, as in absolutely none, and it remains my intent to ask for no more than $20 per donor once the fundraising effort begins in earnest. That’s 4,750 contributors just to reach Gahan’s current total, a number so astronomical that I could not have determined it without a calculator.

But I’m not discouraged. In fact, I’m oddly serene. That’s because I believe that words have meaning, and while City Hall might be flush with the fuel of DemoDisneyDixiecratic machine politics, it is at a decided disadvantage when it comes to the marketplace of ideas – where its collective GPA is lower than Bluto’s.

Not only that, but nothing gets the competitive juices flowing quite as much as being the underdog. It may require an unconventional effort … and we’re just the guys to do it.

Recent ON THE AVENUES columns:

ON THE AVENUES: As Admiral Gahan steers his Speck study into the Bermuda Triangle, crewmen Padgett, Stumler and Caesar grimly toss all the rum overboard.

ON THE AVENUES: Upscale residency at down-low prices.

ON THE AVENUES: Street “sweeping” epitomizes the degradation of governance in New Albany.

ON THE AVENUES: Got spa? Time for CM Zurschmiede to reel in the years.