At the very beginning of the Council’s sewer discussion last evening, it was clearly explained that passing the rate increase on first reading only would send a message to the State Revolving Fund that the city is serious about working with them on their offer to refinance our bond at a reduced interest rate, saving us millions. The SRF has a board meeting this evening and New Albany is on the agenda.

Having passed the first reading, the Council could then schedule the legally required public hearing and any other meetings or information sessions necessary to discuss a rate increase, leaving the remainder of the month to make a final decision before the SRF refinancing deadline. It was also pointed out that, with two more rate increase readings remaining, no one can force the Council to do anything they wouldn’t vote to do. Two hours later, after some of the most asinine Coffey/Price/Schmidt commentary I’ve ever heard–and yes I mean even in relation to other Council meetings, they decided to do just that.

Unfortunately, the major issue at hand wasn’t discussed in those two hours. It’s the issue I brought up yesterday in the comments section of NAC. It’s the issue I mentioned to the Mayor, City Controller Garry, one of the financial consultants and anyone else that would listen to me at the meeting last night. It’s the issue the financial consultants alluded to when they presented a chart showing that inserting over $5 million of EDIT funds into the sewer coffers would only reduce the average monthly sewer bill by a little over a dollar as the concept zoomed over CM’s heads. What issue is that? The issue is which plan to pay the sewer bond is the least expensive for citizens.

That’s right. Despite all the grandstanding about saving the poor citizens money, not a single person actually asked which payment strategy cost the least per person. The big picture take is that the Council often doesn’t get good information because they don’t ask good questions. The reality of the situation is much simpler than that.

Economic Development Income Tax (EDIT) funds are just that—taxes paid by those who live and work in New Albany to be used for economic development. While the Council seems to assume that it’s somehow free money, it’s real dollars coming from the same pockets that pay sewer bills. The Council has repeatedly called for calculations showing how much the sewer rate increase could be reduced per monthly bill if certain amounts of EDIT funds were applied to the situation. What they’ve failed to ask is how much, per person, the EDIT expenditure would cost.

The proposed sewer rate increase is 19%, to be phased in over three years.

When the rate increase is fully realized in year three, the average sewer bill increase will be $5.92 monthly, $71.04 per year.

As explained by the financial consultants, the rate increase would be reduced by one percentage point for every $1.5 million of EDIT funds applied.

It’s difficult to determine exactly how many people pay into the EDIT fund at a given time. As of the 2000 census, there were 29,263 citizens over the age of 16 in New Albany. The best-case scenario would be to assume that every one of them is employed and sharing the EDIT burden. That’s clearly not the case since the same 2000 census showed only a little over 18,000 people were employed. I used the larger number, though, to ensure calculations were conservative.

The true cost of a sewer increase to citizens includes not only the percentage increase that appears on the monthly sewer bill but the initial, upfront cost of any EDIT expenditure applied to the bond payments as well.

With no EDIT expenditure, the cost per citizen is $71.04 per year as mentioned above. If we apply $1.5 million in EDIT, the rate increase is reduced to 18%. That would result in an average monthly increase of $5.61 on each bill. That amount is $0.31 less than if we apply no EDIT. Each citizen would save $3.72 per year. However, the cost of the EDIT investment must be included. $1.5 million in EDIT, divided by the 29,263 possible taxpayers, amounts to $51.26 dollars per person. In short, each person would spend $51.26 up front to save $3.72 per year. It would take 13.8 years to realize enough in annual sewer bill savings to break even, let alone to justify the initial EDIT investment as a savings tool. Even that only remains true if the sewer rate doesn’t increase at all for the entire 13.8-year period. Given the realities of our economy, that’s not a realistic assumption. If the sewer rate is increased even one percent during that time, the break even point will take even longer to reach.

Below is a chart showing how the application of various amounts of EDIT funds would affect the situation. You’ll see the amount of EDIT pledged, the resulting sewer rate increase, the average increase per bill, the amount of monthly and yearly savings generated, the cost of the EDIT investment per person, and the number of years necessary to recoup the EDIT cost before any real savings would actually occur. It’s not pretty. 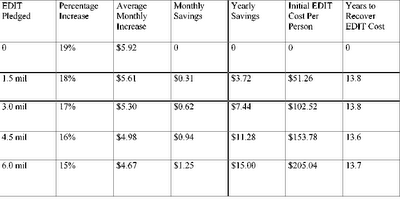 Unfortunately, for many households, the situation would be even worse. Those households with dual incomes and a single sewer connection would effectively see their EDIT investment double while their savings amount would remain the same. The chart below shows the doubled EDIT cost and the doubled amount of time necessary to justify that cost. 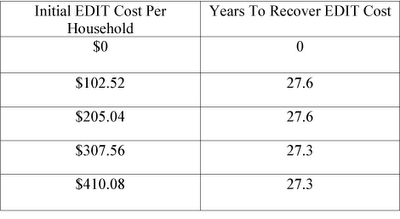 It’s clear that when the Council members say “I don’t want to be responsible for a sewer rate increase”, what they’re actually saying is that “I haven’t thought this through well enough to realize that, in my zeal to keep voters from associating my name with a rate increase, I haven’t realized that I’m actually advocating that citizens pay much more than necessary for the same result”.

I may decide to donate to someone’s political campaign in the future, but I hope to do so voluntarily. Ask better questions, Council, before being saved is worse than the alternative.