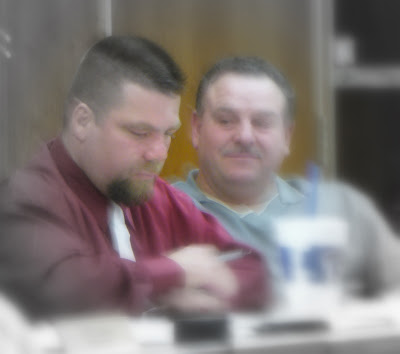 While in Cologne recently, we attended the performance of a nine-piece band, and I must say that the unity of collective purpose on display from the Boss and his musical cohorts is in striking contrast to the fractured discordance typically emanating from the New Albany city council.

But with songs like “Because the Night,” “Candy’s Room” and “Jungleland,” it’s obvious that Bruce Springsteen has far better material.

Not that there weren’t full-throated, arena-sized roars last night. For outgoing at-large councilman Donnie Blevins, it was an evening of indisputably Biblical proportions. Blevins, a credentialed minister, led off what he believed would be his final meeting with a quiet New Testament prayer (a dozen or more references to “heavenly father” blessing any and all present), closed it with an impassioned Old Testament prophet’s tirade (a half dozen angry “bull craps”), and as such, played a small but significant part in the customary display of legislative dysfunction that, in the end, is the only way this council will be remembered.

Specifically, Blevins’ fire and brimstone was directed against fellow councilman Kevin Zurschmiede, who tabled R-07-45, a resolution to provide funding for Haven House, the homeless shelter in Jeffersonville. Haven House has been beset with managerial difficulties in 2007, yet remains the only local organization committed to dealing with a problem that few community members or elected officials seem willing to admit exists.

Zurschmiede explained the withdrawal as being necessitated by a “couple of phone calls” he received earlier in the afternoon. If these calls were indicative of the malice with which some in the community customarily regard Haven House’s director, Barb Anderson, then it’s likely the calls were anonymous; be that as it may, Zurschmiede summarily punted and Blevins immediately pounced on the fumble, first asking that the tabling be reconsidered, and then, much later at meeting’s end, loudly and passionately providing his view of the problem with colleagues who don’t know what it’s like to be “out on the street” at this time of year before storming out of the room, not to return.

C’mon, Kevin – just a “couple” of calls? You need to do better than that.

A proposal to inaugurate development of the last plot of industrial park land off Grant Line Road was approved in spite of characteristically self-serving sour grapes on the part of Dan Coffey, and this event must have pleased One Southern Indiana’s chieftain Michael Dalby, who was in attendance to see whether the subsequent tithe to 1SI would pass muster, but Jeff Gahan did not introduce the measure, astutely pointing out that “the advocacy of 1SI’s mission needs to be clarified.”

Thanks, councilman; better words were not spoken last evening.

This paved the way for the reintroduction of precisely the same redistricting ordinance that was bounced out of federal court less than a month ago, which last night was passed yet again on the first reading, with second and third readings reserved for a special council meeting to take place next Thursday (for redistricting and other necessary year’s end business).

In essence, it would seem that the council’s attorney has advised it that the previous ordinance’s failure resulted entirely from the improper time frame of its passage, and not from the numerically unbalanced inadequacies of the reconstituted districts, as was clearly enunciated by the judge. As for these numerical inadequacies, council is being told publicly that its attorney has (a) a previously unrevealed magic bullet to make the discrepancies irrelevant, or (b) a certainty that a different and better disposed judge will hear the case when it returns to court in early February.

I suppose we’ll see about that.

Coffey meekly tabled the housing authority ordinance, and the police force was given its sought after raise, as was the city clerk and the mayor. The latter debate became unintentionally hilarious when Coffey, a newfound advocate of providing incentives to elected officials, decided to have it both ways.: “It’s the only way to get qualified people,” Coffey said, referring to the mayor and clerk, before pausing only briefly before back peddling furiously to add that the exact same logic does not apply to the council itself, which most emphatically should not be paid more, perhaps because that might attract “qualified people” who would soon tower over Coffey in quality.

True enough … in the council’s current and mercifully soon to be concluded incarnation, but then again, the “short” view is a Coffeyite birthright.

Finally, as has been the case so many times before, it was the city’s sewer utility that provided the most opportunities for grandstanding, caterwauling and the indiscriminate slinging of bile. Coffey’s measure to reconstitute the sewer board was defeated, with even his conjoined counterpart Steve Price differing with the Wizard. Perhaps the EPA’s recent letter commending New Albany for painstakingly crawling to a point within eyesight of compliance with the infamous consent decree caused some council members to vote on the basis of “if it ain’t broke … ” although as we should have learned by now, nothing is certain when it comes to the way that our effluent travels from commode to river.

Or, in like fashion, from twice monthly council packets to the (purportedly) speaking portion of the meetings. Soon it will be over, and not a moment to soon, and we can then begin an earnest consideration of whether Larry Kochert’s and Bill Schmidt’s combined 52 years of service, lengthy tenures much praised last evening, amount to more or less than the quantity of drum majorettes doing the watusi on the head of a pin. 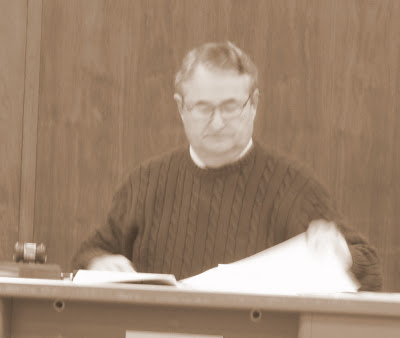