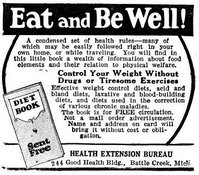 I had an appointment last Saturday night at Floyd Memorial’s Sleep Disorders Center, and while there – strapped and wired to resemble a bit player in the classic “Plan 9 from Outer Space” – I took a reasonably comfy six-hour nap while sensors hummed, surveillance videos whirled, and somewhere in this great nation, a hand of solitaire was dealt.

It is my hope that this altogether surreal experience in Floyd Memorial’s subterranean bunker is the final diagnostic act of 2006, a series of adventures that began in October. The crossroads, and my own subsequent less traveled road, came into view during what turned out to be a climactic visit with my regular physician, known to those habitués of the local blogosphere as Healthblogger, a.k.a Dr. Dan Eichenberger.

He listened with interest to my complaints of physical fatigue, discomfort and a general malaise, and answered with a suitably devastating observation: Even after more than 3,000 bicycling miles recorded since my last visit, there had been a noticeable weight gain.

Gee, asked the observant sawbones, somehow avoiding sarcasm — how might that possibly be?

For a dedicated trencherman and avid connoisseur of all things tasty, either solid or liquid, it seemed a pivotal moment. Visions of crusty Bavarian pork knuckles and smoked lager, memories of red Algerian wine and spicy couscous with tagine, viscous flavor profiles of a hundred thousand jet-black Imperial Stouts, the gentle caress of Galway Bay oysters, enough vintage port to float Lewis and Clark up the Douro … and, of course, that famous time locked in all night at the Krispy Kreme warehouse … all flashed before my eyes as I pondered an intelligent response to a perilously succinct question.

Perhaps, I ventured, just perhaps … my eating and drinking habits were, uh, a bit excessive?

Could be, he harrumphed, though with professional compassion, and proceeded to put the hammer down hard – as well he should have, given the carefree nonchalance with which I’ve blithely ignored his medical advice previously. At deserved lecture’s end, the verdict was two-fold: Lose weight and at least venture in the general direction of restoring some measure of my boyish figure, and furthermore, as importantly, determine the degree to which sleep apnea is affecting my overall health.

Presumably, all else would follow these steps. As Dean Martin once lamented, “ain’t that a kick in the head?”

Ahhh, pasta. White clam sauce, plenty of garlic. Something strong, dry and red to wash it down? Don’t mind if I do, only half (or less) as much.

Well, there could be worse things, and verily, the glass usually is half-full even if one is prohibited from drinking the contents. Broadly speaking, my other health indicators have been judged to be in uniformly good shape, leaving my own worst enemy – that fellow with the voracious appetite standing in front of the mirror – to be tamed.

Less than two months later, I’m delighted (and somewhat surprised) that it’s happening on schedule. I’m roughly twenty-two pounds lighter, and have had to cut notches in two belts (in the good direction). Last weekend’s sleep study results will be analyzed for clues as to the final pieces of the puzzle, and if the expected prescription results in more restful nights and more energetic days, I’m certainly for them, and I’m quite willing to start a new somnolent career as the masked snoozer.

Remarkably, dieting hasn’t been that tough, after all. Reducing the instances of less healthy eating (have you seen my hot wing fetish at full bore?), better control of portions, frequent snacking on fruits and vegetables, and continuing the traditional exercise program have been just as effective as I always knew they’d be, even if only part of the regimen ever was followed before.

To be sure, beer consumption is down, but by no means out. Half-pint shift beers and sampler portions of different styles mostly suffice, and as a beneficial side effect of a change in lifestyle, I seem to be witnessing a regeneration of the taste buds and finding new flavor dimensions to old favorites.

While territory south of 250 lbs hasn’t been explored since the Clinton Administration, and progress certainly will be harder during holiday season, there’s encouragement all around. No one, even Dr. Dan, has suggested that I can’t enjoy the foods and drinks I prefer to partake, only that less of them must be permitted to take the historically quick and easy journey from fork and glass to stomach.

Moderation. Less is better. Most of the time. I believe it’s possible. This can be done.

Of course, almost none of what I’ve been told and have absorbed in recent weeks has been startling news to me. I’ve always known quite well what to do to live a healthy life, and as in the case of most people, these have been declared purely optional tenets – practices to be deferred until the last minute. But 46 years of age isn’t the same as 26, is it?

In point of fact, I’ve had an edifying and absolutely delightful quarter-century binge, and while there are a few regrets, they’re far too few to mention. Almost none pertain to the staggering quantities of food and drink, with the possible exception of the time I agreed to accompany my Slovak students to an after hours “sport club” where the only menu items were insufficiently salty pretzels shards and Stolichnaya vodka. It was painful. Very, very painful.

Profuse thanks go to all my friends for understanding and refraining from the temptation to tempt me, and to an ever patient Mrs. Confidential for rapping me on the knuckles (and worse) when I spot the chocolate, spare ribs and growlers of beer, and get all Pavlovian about them.

Time for some carrots and an apple.