The C-J’s random New Albany and Floyd County news coverage generator gyrates furiously again today, with reporter Dick Kaukas emerging from behind Door #3 to offer a solid snapshot of the city council in mid-ponder over councilman Larry Kochert’s belated decision to take part in the life of the community by means of an impending proposal to institute a smoking ban. 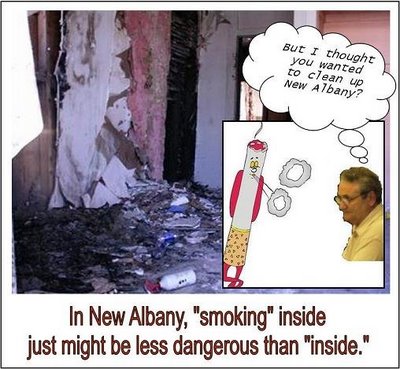 The New Albany City Council probably will be asked to consider a comprehensive smoking ban in the next few months.

But Councilman Larry Kochert, who backs a ban, said he has decided not to press for an immediate vote on the issue.

“I don’t see it coming up before the first of the year,” he said in an interview last week. “I’d rather wait a little bit, because from what I can see right now, the support’s not there” for extensive restrictions.

With the chins of our council members being rubbed raw (by the way, has Dave Ramsey taken a position on tobacco, Steve?), onlookers might be forgiven for asking CM Kochert, whose personal inclination probably lies in the general direction of the draconian, exactly what he plans to do to increase the level of “support” for extensive smoking restrictions between now and that future day when the stars blessedly align, the tea leaves adhere to form the words “I have something resembling a dream, too,” and CM Kochert plunges into the smoking ban scrum.

NAC finds it well beyond amusing, and veering into that most un-American realm of irony, that the councilman’s touching concern for the health of citizens has not been manifested with action toward the day in, day out living conditions of those many residing in substandard properties.

Now that I’ve vented, see the preceding for our regularly scheduled Monday post: CM Kochert’s council legacy? One clue: It won’t be a smoking ordinance.