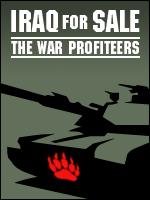 It’s been a year since our memorably frigid “Wal-Mart bites” movie screening at the Farmers Market in downtown New Albany. The movie’s director, Robert Greenwald, has been hard at work, and his most recent cinematic muckraking exposition seems deserving of a showing — perhaps indoors, at our meeting facility at NABC?

Iraq for Sale is the story of what happens to everyday Americans when corporations go to war. Acclaimed director Robert Greenwald (Wal-Mart: The High Cost of Low Price, Outfoxed, and Uncovered) takes you inside the lives of soldiers, truck drivers, widows and children who have been changed forever as a result of profiteering in the reconstruction of Iraq. Iraq for Sale uncovers the connections between private corporations making a killing in Iraq and the decision makers who allow them to do so.

Here’s an e-mail from the filmmakers.

When we started in January, war profiteering was a subject that desperately needed attention. It was a story that wasn’t being told and the issue cried out for exposing. And then this past Sunday November 12 the issue was front and center on page one of the New York Times and all over the news. In different and various permutations, the headlines all read that there will be hearings, there will be oversight, questions will be asked. The profiteers will be exposed.

Is amazing too strong of a word? It is a result of all your efforts. Your support of Iraq for Sale and the issue of war profiteering has been remarkable.

So, thank you to the volunteer researchers who worked in secret to get us key information.

Thank you to the thousands of screening hosts who made over 4,000 official screenings happen.

Thank you to the Patriots Against War Profiteering who donated 8,500 DVDs to libraries, schools, and military installations around the country and around the world so this film can be seen by as wide an audience as possible. Read some responses from folks who received the film, like that of Army Medic Dan Walsh who wrote to us while serving in Iraq “This stuff needs to be known by the average American.”

Thank you to Senator Dorgan, his staff and the Democratic Policy Committee who hosted hearings in DC on this issue- and invited people in Iraq for Sale to participate and share their stories. You can watch video of the hearings at the DPC website.

Thank you to the elected officials like Senator Harry Reid, Senator John Kerry, and Congressman James Clyburn who used the film to call attention to the issue and the need for oversight and accountability in the war.

Thank you to all the candidates who ran for office in last week’s election – like Jim Webb, who saw the film and immediately agreed to introduce it at our DC premiere and then organized over 100 screenings in Virginia- and candidates across the country like Sherrod Brown and Bernie Sanders who used the film in their campaigns and urged voters to choose a new path.

Thank you to the folks at UNITE HERE who hosted hundreds of screenings across the Mid-West and reached thousands of union members with the film.

Thank you to the heroes and heroines in the military, like Sergeant Jon LaCore who wrote to us after watching the film in Iraq. In his letter he said, “I’m anxious to see if a change in the House and Senate will bring about a change here in Iraq.” And, looking at the Sunday paper, it looks as though he may get to see change happen.

A deep heart-felt thank you to all the families and patriots who participated in this film. Your bravery in sharing your stories has touched millions. You have brought about real change and for that we are all grateful.

And finally THANK YOU to the 3,000 of you who contributed 50 dollars or more to make the film happen. We want you to know the front page of the New York Times would not have read the way it did, if all of you had not made it possible to begin the work on the film with your generous contributions.

Each and every one of us at Brave New Films sends our great appreciation, respect and deepest thanks for an amazing job. We celebrate the critical raising of this issue, we salute those who have stepped forward to tell the story at great personal sacrifice. We grieve for those whose lives have been sacrificed to profiteering. And, we look forward to the work ahead to make sure the profiteers are stopped.

Come January we look forward to getting your ideas on what’s next for Brave New Films.