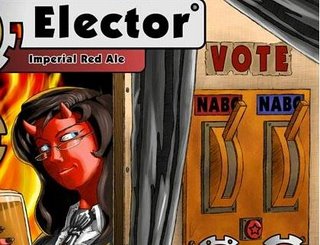 Don’t forget: You must have an ID to vote – and to get served.

Don’t forget: When the taps finally open at 6:00 p.m., NABC’s having a special promotion. Buy a signature NABC logo glass of Elector at the regular price, and keep the glass (first 50 customers).

Another election day is here, and with it eleven hours of state-mandated prohibition against the sale of demon rum.

Presumably, this unwelcome vestige of an otherwise discredited social policy serves as a bulwark against the horrific possibility that unscrupulous politicos or their conniving agents might swap half-pints of Kessler (or a similarly valued slopping spree at Hugh E. Bir’s) in exchange for a poor wretch’s vote.

As there exists no commensurate prohibition against the sale of strong black coffee, chocolate-covered Krispy Kremes and hickory-smoked bacon, apparently the veiled but very real threat of breakfast-induced bribery is not worthy of the same scrutiny as that posed by the insidious grape and the grain.

If you’re hopelessly intoxicated after ingesting that half-pint of Kessler, are you really any more destructive to democracy than the perfectly sober voter who is following instructions provided by a fundamentalist preacher who has promised not temporal inebriation, but a favorable reference when the time comes to take up residence in heaven?