The official groundbreaking ceremony for Scribner Place was held today, and it was both well attended and appropriately upbeat. Exactly how lighthearted and positive it was can be easily grasped by a quick visit to Gina’s Letter from New Albany blog for a glimpse at an unexpected treat.

Monday evening update: Check the other usual sources (Tribune, Courier) for their takes, as well as this late piece I posted at Potable Curmudgeon. 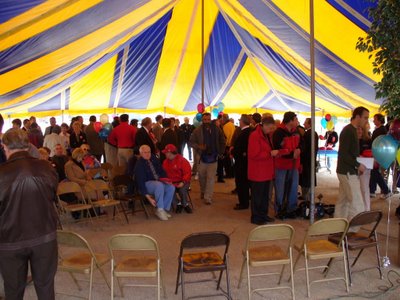 Afterwards, a non-partisan reception took place at the Grand, reinforcing the truth that with reference to Scribner Place, political party affiliations were handily transcended. All along, it has proven to be far more difficult to mesh disparate manifestations of cultural consciousness than it has to bring Democrat and Republican together for the common good. 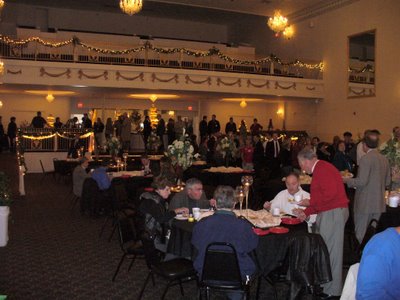 Cultural consciousness … well, yes, many people who worked long and hard to bring the project to fruition were there, as well as at least one whose presence suggested that the “slippery” era of Vitalis politics hasn’t yet passed us by. 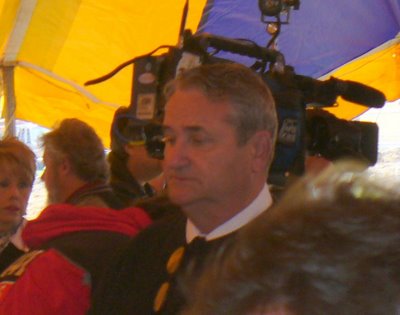 Funny, but throughout the months of city council debate and the continuing effort by fellow Gang of Four inmates Coffey, Schmidt and Price to thwart the will of the community, Councilman Larry Kochert devoted precious few recorded utterances in support of Scribner Place.

Rather, the words he expended tended to take the form of deep-seated vituperation against Floyd County elected officials. CM Kochert’s attitude throughout the process was one that would lead unbiased observers to conclude that he had no great love for the concept, but was perfectly willing to hold it hostage to his dictates of his undefined grudge. Today, he sat in Bob Uecker’s “front row” seat, and for many in attendance, the massive hypocrisy emanating from the vicinity may not have seemed especially relevant.

Not here. We noticed. So should you – especially if Slippery Larry runs again.

With the union of the YMCA, Caesar’s Foundation, LifeSpan, Floyd Memorial Hospital, New Albany and Floyd County about to be solemnized, and at precisely the moment when Pastor LaRocca intoned, “Speak now or forever hold your peace,” the Third District councilman Steve Price attempted to bungee from a passing helicopter and put a stop to the ceremony, which he had previously denounced as “forcing those Frankfort Avenue people right down our Pandora’s Box.”

Unfortunately, Price’s “Sam’s Club” cord was too short, and he was thrown with visible force against the façade of Schmitt Furniture, sliding unobtrusively down the building’s side, and into a featured sale-price Ottoman on the sidewalk below.