… and a whole new take on “street spam,” but just a few months too early, oui? 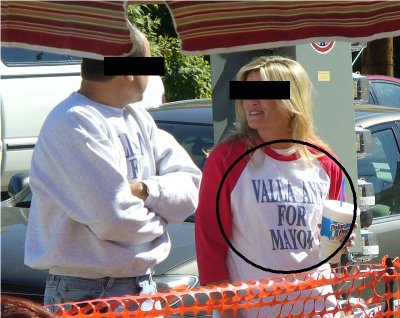 Actually, no. It isn’t too early.

If you think the current election campaign is wild and wooly, the riotous local 2007 apple bob begins no later than 6:01 p.m. on Tuesday, and perhaps earlier if one or more hopefuls decide to use his or her two minutes of Scribner Place groundbreaking ceremony speaking time (or the post-fete, longneck-strewn bartop at Hugh E’s) to make an announcement of intentions.

At any rate, NAC’s decision to publish this shocking photo is not to be construed as an endorsement.

Chances are you already know that.

Geez, whatever happened to the one-time candidate and visionary Verle Huffman, and his proposal to return square dancing to downtown New Albany?

Photo credit: The senior editor claims the candid shot as his own, as snapped during the recently concluded Harvest Homecoming booth days in downtown New Albany.