I have learned that Democratic congressional hopeful Baron Hill will make an appearance during the weekly meeting of Drinking Liberally (New Albany & Southern Indiana) this Thursday evening at 7:00 p.m. at Rich O’s Public House. 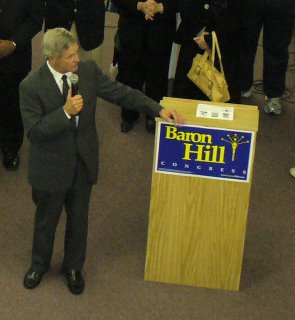 Hill’s bid to recapture his seat in a third epic electoral slugging match with Mike Sodrel is being watched throughout the country as a key indicator in the mid-term election.

In expectation of a larger than usual turnout for Drinking Liberally, we’ll be moving the meeting to the Prost special events room. DL organizer Lacy Davis has given me the okay to spread the word, and all readers are cordially invited.

As a counterweight, albeit small, to the prevailing crackpot sentiments of theocratic fascism washing over Indiana’s (and the nation’s shores), I’m delighted to host the group and the candidate, and to serve Progressive Pints to those in attendance.

As a reminder, Drinking Liberally is: 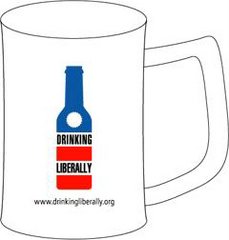 An informal, inclusive Democratic drinking club. Raise your spirits while you raise your glass, and share ideas while you share a pitcher. Drinking Liberally gives like-minded, left-leaning individuals a place to talk politics. You don’t need to be a policy expert and this isn’t a book club – just come and learn from peers, trade jokes, vent frustration and hang out in an environment where it’s not taboo to talk politics.

Bars are democratic spaces – you talk to strangers, you share booths, you feel the bond of common ground. Bring democratic discourse to your local democratic space – build Democracy one drink at a time.

(Crossposted at The Potable Curmudgeon)