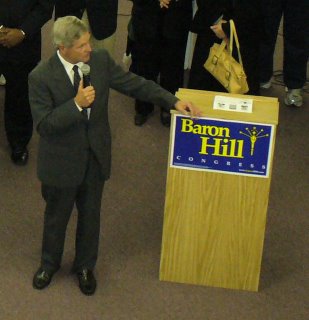 Editorial endorsements may or may not carry weight in today’s world, and yet today’s Louisville Courier-Journal provides a succinct summary of the case for former 9th District congressman Baron Hill and against incumbent Mike Sodrel in this year’s hotly contested rematch.

The C-J distills the argument here:

But the key issue in this race is a number: 97. According to CQ.com, Rep. Sodrel voted to support the President’s positions 97 percent of the time in 2006 — the highest figure for any member of the Indiana or Kentucky delegations.

The troubled state of the nation demands far more than meek fealty to the Bush administration.

The CJ’s endorsement also cites an important position of Hill’s that we’ve quite frankly missed here at NAC:

(Hill) favors federal funding of stem-cell research with embryos that are going to be discarded anyway and says he would have voted against federal intervention in the Terri Schiavo case.

In an on-line reader comment that follows the C-J’s endorsement, Hill predictably is savaged for supporting gay marriage, abortion and (gasp) Planned Parenthood. The reader curiously omits Hill’s presumed flag burning fetish. As time runs out, expect Sodrel’s operatives to accuse Hill of preferring NBA basketball to the purer collegiate variety, of eschewing Coor ight for Heineken, and of laughing out loud at those clever Monty Python skits that always eluded the sitting congressman’s grasp.

And so it goes, because the Sodrel congressional campaign, and by extension the Republican establishment nationwide, is bereft of sensible policy content, but refreshingly beset with inconvenient scandals and a purely sordid record of incompetence so damning that even Louisville’s Representative Ann Northup now finds it useful to throw Defense Secretary Donald Rumsfeld under the rapidly disintegrating bus.

Of course, Northup’s carefully calculated call for Rumsfeld’s resignation comes at least two years too late, and owes to nothing deeper than her commitment to say whatever must be said in order to be re-elected, but of course our own Mike Sodrel is capable of nothing remotely similar in majestically limited scope, trusting instead that the residents of the 9th District are sufficiently parochial and bedazzled with patriotic imagery and religious extremism that they’ll fail to comprehend the magnitude of a number like 97% and what it devastatingly portends in matters like the economy, foreign policy and civil liberties:

See “Cultural despair, the “poisoning” of Habeas Corpus — and why Mike Sodrel should be sent home.”

Rep. Sodrel is a likable fellow, but Indiana and the United States need change and independent minds in Washington. Baron Hill can help get the nation back on track. We enthusiastically endorse him.

“Independent minds”? Now that’s a truly revolutionary call — and something we can be for.

Scenes from the Thursday rally … from the cheap seats.