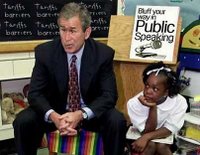 Remember last January, when we briefly were teased with the thought of President George W. Bush coming to New Albany?

Even if the President did still drink, I wouldn’t serve him, but I’d consider a cream pie in Dick Cheney’s face (January 6, 2006).

Now, many months later, with our current 9th District GOP representative having exhausted his seemingly endless and purely banal supply of “my Democratic opponent is a gay lovin’, flag burnin’, terrorist coddlin’, tax ‘n’ spend, John Kerry look alike, liberal wussy,” the ever creative Mike Sodrel finally brings to us the commander-in-chief in the war against civil liberties, albeit to the high school gym in Sellersburg, and not to the far friendlier confines of the Grand.

The proximity of the Grand to bNA’s Progressive Pints undoubtedly is to blame for losing the presidential contract.

It will be the first presidential visit to the district since Lyndon Johnson visited Clark County in 1964, said (campaign manager Cam) Savage.

“It’s a great opportunity right before the election to energize the base,” Savage said. “People are going to hear directly from the president about how important this election is, how important keeping control of Congress is to win the war on terror, keep taxes low, and keep the economy moving in the right direction.”

I suppose this is as good a time as any to announce that on November 7, I’ll be voting for Sodrel’s challenger, former congressman Baron Hill.

It may come as a surprise to those readers who think they know me, and who’ve consequently made the mistake of confusing stylistic brassiness for dissipated insolence, but my political musings to date have not been posted for the purpose of grandstanding, and have not been intended solely as rhetorical pot stirrers. These issues are ones that I take seriously, and the publicly voiced conflict of conscience within me is – and continues to be – genuine.

My left leanings are obvious and sincere. At the same time, I’ve grown weary of the absence of a true, ideological alternative to the radical right, and demanded that the Democratic Party toss me some semblance of a bone to earn my allegiance, rather than continue to function only as the sole tenable alternative to the GOP. The absence of this bone might yet embitter me, but first, there’s work to do.

During our discussion at NAC yesterday, Randy “All4Word” Smith wrote:

Hill. If only on the assumption that when in the majority, Baron Hill will be free to vote his conscience without regard to election year shadings. If only to guarantee Democratic control of the House. If only to prevent a Bush rubber-stamp.

Hill MAY not be as “blue dog” as he makes himself out to be, but Mr. Sodrel is an automatic Bush vote. Anything is preferable, and a vote for Schansberg IS a vote for Sodrel.

We can debate the system and our options until we turn purple. Sometimes we have to live with what we have and work for change. But this election is too critical to worry about the system and more about who is in office.

Of course, Randy and John are right … and I’m with them on this one.

At the same time, I’ve no intention of letting the Democratic Party off the hook. It’s too bad that Floyd County’s Democrats have done precious little to earn my support, a development all the more galling considering the party’s “dream team” leadership slate, which has tolerated the continuing existence of political charlatans like the conjoined councilmen, Dan Coffey and Steve Price, and other obstructionist Democrats who’ve been permitted to run rampant in opposition to progress and revitalization.

Meanwhile, state and national Democratic establishments likewise have missed ample opportunities to articulate progressive alternatives to the right-wing extremism espoused by the neo-con and evangelical elements in America. The intrinsic feebleness of the two-party monopoly is yet again offered as triumphant proof of the superiority of our democracy, and I’m not buying into it.

But … there’ll be time for that debate later, and until then, the dictates of a reality-based world strongly suggest the viability and utility of pragmatism as a permissable salve for the tortured conscience. Let’s worry about the common foe now, and return to our other issues later.

To each his, or her, own. Vote “for” Hill, or vote “against” Sodrel by supporting the candidate (Hill) most likely to defeat the incumbent. To join in deposing Sodrel is to vigorously repudiate the failed policies of the worst President in American history, and perhaps to begin a process of restoring balance and sanity to the nation.

As a card-carrying, anti-Republican operative, I’ve absolutely no chance of being invited to accompany Auntie V. to the Bush league pageantry in Sellersburg on Saturday. It looks like the best option for me is to wander down to Pearl Street on Thursday (October 26) at 4:00 p.m. and have a look at Baron Hill.

Make no mistake: It is something that I intend to enjoy for its own merits.