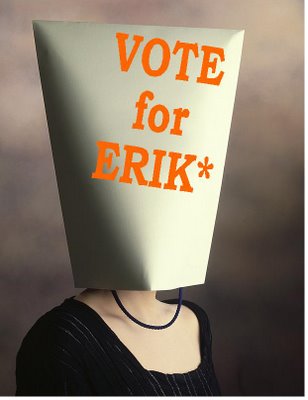 *Hi, it’s ‘Erik’™ from Freedom of Speech. You may have heard that I want to run for an at-large city council seat in 2007, but those corrupt and just plain mean Garnerites won’t let me register under my ‘pretend’ name.

Now, tell me: How can I support free speech if I’m forced to be who I really am? Next thing you know, they won’t honor my Bazooka Joe University diploma (thanks Danny), and there goes my 10% discount down at the commissary.

It just isn’t fair, so it your favorite councilman’s name begins with ‘Steve,’ then please write or call him and demand that the city council change these stupid rules so I can serve alongside those pillars of accountability and manly virtue on the right side of the table — especially since my cherished protector, Auntie V, is going to be this city’s next mayor, and of course I’ll get to go with her to Indianapolis to see the governor, then go shopping in all those trendy boutiques that usually won’t even let me come in the door.

Freedom of Speech says, don’t forget to vote for the bag lady in 2007!!

Note: For more information on the candidate, read “Another cowardly FOS posting … but who’s counting, Auntie?“