Most of us associate the city of Prague with numerous examples of architecture representative of “old Europe,” but as with any modern city, the truth of the matter isn’t so simple even if a larger proportion of venerable buildings have been preserved there than in other, less fortunate (read: war damaged) European locales.

Sadly, the pre-fabricated concrete contributions of the socialist era, though functional, cannot be said to contribute to any aesthetic beyond that of the ham-fisted and totalitarian. Since a majority of Czechs reside and work in these still largely gray, formless blocks, and will do so for quite some time to come, one senses that the best hope for their redemption is to apply a coat of paint and wish for a high level of prosperity within the forthcoming Euro currency zone that will permit frequent holidays abroad.

Note that NA Confidential has long advocated the same cost-effective and colorful solution (paint, not vacation) for prevailing local monstrosities like Riverview Tower, which persists in appearing as an ominous relic of the discredited Bloc rather than an attractive part of the civic skyline. 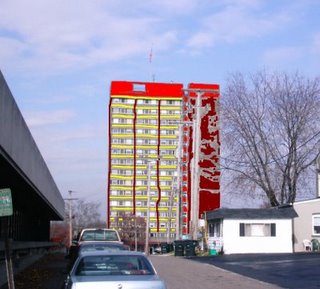 See: Paint and public art as progressive ideals — why not in New Albany?

This blog remains a strong supporter of the ideals of historical preservation, which in Prague’s case must be considered the city’s tourism bread and butter — and might be here, as well. At the same time, we look to nearby urban areas like Columbus, and note the record of success when blending the modern with the historic.

A superb example of this recognition exists on a street corner in Prague, by the majestic Vltava River. 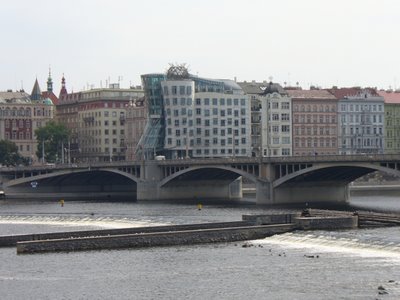 An excerpt from Meghan Walsh’s piece in the Journal of the International Institute sets the table:

While working in Prague this past summer, I met Vladimir Milunic, the Czech architect who collaborated with Gehry on one of his latest projects, an office building for the Dutch insurance company, National Nederlanden, to be completed in December 1995. The project, a bold, curved structure that resembles a pair of dancers in motion, is affectionately called “Fred and Ginger” by American architects, and tancinsky dum (the dancing building) by Czechs.

(Ted) Heavrin, president of the Floyd County Council, said the best way to solve the overcrowding issue at the City-County Building is for the city to find its own building, which would allow the county to take over the current government center. That scenario recently occurred in Jeffersonville …

… County Councilman Randy Stumler would like to take Heavrin’s idea to the next level. He said a new government center needs to be built as part of the Scribner Place project and transform the current building into a criminal-justice center.

Stumler said the county should establish a timeline.

Kudos to Randy Stumler for his consistent advocacy of this position, and in fact, it sounds suspiciously like something that might become part and parcel of a genuine — dare we speak the word in public? — platform, should his Democratic Party ever be permitted to birth one.

And so, a dancing building, or something like it, as the city’s center of operations on the right bank of the Ohio?