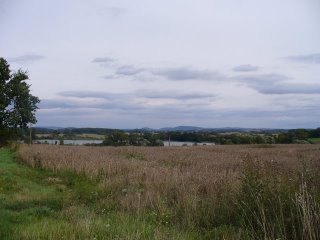 I’ve joyfully awakened two mornings running to orchestral music by Dvorak, the Czech composer. Twelve days in Bohemia play just these sorts of tricks, and even though the Czech lands have changed drastically in the century since Dvorak’s death, the country’s pastoral vistas still have a way of conjuring spontaneous Slavonic dances.

Back home in New Albania, ongoing efforts to lift our once vibrant city out of its prolonged period of ennui and institutionalized neglect have cleared another hurdle.

Work on New Albany’s portion of the $41 million Ohio River Greenway is to begin next month using a $1.2 million state grant the city received yesterday …

… Mayor James Garner said a contractor for the project will be chosen next week. Garner has spent this week in Indianapolis trying to expedite the grant before a Sept. 30 deadline for federal matching dollars.

Not unexpectedly, there is another side to this story, one that you can read here, as presented by my friend New Alb Annie. Unfortunately, it remains that persistent and disingenuous public choreography on the part of Ms. Bolovschak, our Greenway Commission member, has a tendency to distract (and detract) from her energetic good works. That’s too bad. Who is right, and who is wrong? Who gets credit, and who doesn’t?

As we await the verdict, perhaps the cameras will again be rolling, the teleprompter merrily humming, and Professor Erika absently doodling in crayon at tonight’s second of two September city council meetings. A brief preview is offered by the Tribune’s Eric Scott Campbell:

How long will it take for 1st District councilman Dan Coffey to say, “It’s the first I’ve heard of it”?

Will 3rd District CM Steve Price’s “no” votes make any sense at all?

What are the odds that the council Democrats’ continuing divisiveness will yet again permit lone Republican Mark Seabrook to float wisely and gently above the fray even as he prepares for an election battle with Floyd County Demo party chairman Randy Stumler, who has consistently refused to discipline the pathologically wayward Gang of Four?

Let’s just hope that the meeting doesn’t keep us past Bistro New Albany’s last call. Progressive pints — and in a pinch, Dvorak — can be relied upon to soothe the dissonance engendered by the pettiness of local politics.