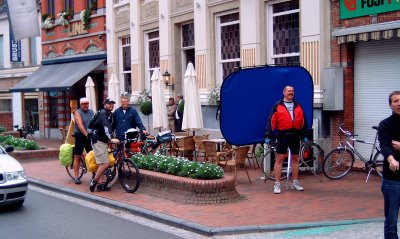 It’s time again for a pilgrimage to the Old Country.

Except that this time, as on three previous occasions, they’re panniers I’ve packed, along with a bicycle. Somehow the beauty of European beercycling managed to elude me for more than two decades – through years of pleasure and pain, cloudiness and periodic lucidity – but now that it’s all mercifully clear, I’ll seldom opt for any other mode of travel n Europe.

Beyond their vague origins in Germany and Central Europe, little is known about the lives of my ancestors, and to be truthful, I’ve not devoted time to researching the specifics. For me, it’s always been enough to know that most of them came from Germany in that country’s far-flung, geographic sense.

We’re built from peasant stock, going back too many generations. Like so many others, coming to America was a prescient choice that made ample sense at the time, and perhaps it still does. At one time I’d have loved to be an expatriate and return to the scene, but while pondering the whys and wherefores of the situation, strange things happened.

I evolved into some skewed semblance of adulthood, passed through many of the stages therein, and lost sight of the bumpkin abroad. There’s general acceptance now. I live where I live, and I am who I am. So be it. It’s a good life, in the end. Somehow I’m seldom taken seriously when venturing into sincerity, but heartfelt thanks go out to anyone and everyone who are a part of this work in progress.

It’s my final morning in NA prior to three-weeks of beercycling with the lads, beginning in Bamberg, Germany, home of the world’s greatest Rauchbier, then continuing through the Pilsner brewing heartland of the Czech Republic to Vienna – where lager brewing was refined 150 years ago by Anton Dreher.

Consequently, the Publican’s Choice today is precisely that: Lager. Not the swill peddled by multi-nationals, but the essence of Central Europe as displayed by Pilsners, Oktoberfests, Bocks and steins of frothing beerhall helles.

Yes, I’m a hophead, and an aficionado of strong ale … and yet lager has its place, even with me. Appreciate it when done correctly, and know that the forthcoming dalliance into the category created by my ancestors, and accompanied by pork served in more ways than you could ever imagine, will not cause me to forget IPA and Imperial Stout.

In other words, I’ll be back. See you then. In the meantime, colleagues All4Word, Bluegill and perhaps even Gordy “Highwayman” Gant will be writing

See also: How we operate: Beercycling in Central Europe, 2006.

(Photo credit … Bob Reed must have been taking the picture, but it was Tim Eads’s camera. We were in Poperinge for the final leg of our 2004 Tour de Trappiste — in route to Westvletern — and were being filmed by a Belgian television crew.)