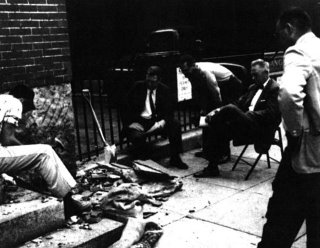 Earlier in the week, we happily referred you to 3rd District councilman Steve Price’s most recent meandering paean to his obstinate pursuit of nickels and dimes, an essay produced in cooperation with the Masked Erikas, and one that amply illustrates the accidental councilman’s unparalleled ability to sloppily string together entirely unrelated clauses, and to emerge with a shiny new conspiracy theory custom-made for New Albany’s crusty cadre of politically motivated obstructionists.

If you’re in the mood for the “spin” cycle, note that the flailing councilman has wasted no time in consulting the Coup d’Geriatrique’s reality fabrication bureau, contributing a crayon-stained press release that can be read here: A LETTER FROM COUNCILMAN STEVE PRICE.

Presumably having been introduced by an unidentified literate bystander to the concept of “that there word book thing” (the dictionary) — but not by conjoined councilman Dan Coffey, the unfortunate victim of a devastating allergy to books and reading — CM Price’s letter also defends his tastelessly choreographed cry of “rape” at the August 7 council meeting on the grounds of fully intentional metaphor.

Fortunately, Maury at New Albany Today provides an eloquent response to this latest ex post facto obfuscation on the part of CM Price:

I find the whole affair to be sad and distasteful. Mr. Price should have known to use another word or phrase to express opposition. The whole episode detracts from what Mr. Price intended to say. The utterance reflects badly upon Mr. Price. He has only himself to blame. What more can I say? You only have to look at Mr. Price.

In the end, however, we, the Third District, are being screwed (I mean raped) and Mr. Price still does not get it.

I asked Bob Dylan for his opinion:

Yesterday, in spite of the dire predictions of the masked denizens of the spitwad blogyard, CM Price’s letter was duly published in the Tribune.

Unfortunately, it made no more sense the second time than the first, but given the councilman’s proclivity for chanting the same tired mantra over and over again in the forlorn hope that wishing will make it so, we’re probably doomed to hearing the letter read into the public record at tonight’s city council meeting, which convenes at 7:30 p.m. in the 3rd floor conference room of the City-County Building.

But there’s always hope for Thursday night council meetings, because the Bistro New Albany is open for dinner on Thursdays, and bNA serves refreshing progressive pints that help soothe the symptoms of the “Blight from Dewey Heights” – although the condition will not be fully cured until the spring of 2007.