This is NOT a Weekly World News reprint. It only seems that way.

Helen, our friendly neighbor down the street, formerly lived in Dayton, Tennessee. She divulged this fact to me earlier this summer after I’d mentioned the Scopes Monkey Trial in “H.L. Mencken on William Jennings Bryan … ”

We laughed and had a mock argument over which town, Dayton or New Albany, consistently displays more hostility toward rationality and common sense, with me citing as examples various local Luddites and their clueless council Jethros, and imagining that Dayton’s in far better shape than NA.

As it turns out, maybe — maybe not.

Last week, Helen forwarded the following from Rhea County Online. Keep in mind that June Griffin is (or was) a candidate for Congress. Helen provided the photos, which are from a Dayton celebration earlier in the year. 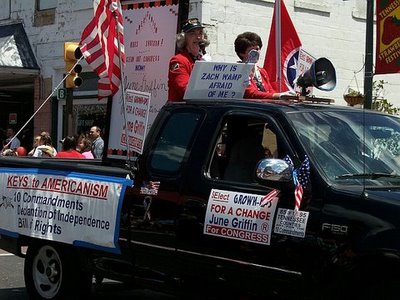 June Griffin, of Dayton, a staunch defender of the Bill of Rights and Ten Commandments, was arrested Tuesday afternoon on a capias warrant for civil rights intimidation, telephone harassment, theft and vandalism.

Griffin was released on $5,000 bond Tuesday afternoon. She is scheduled for arraignment in Rhea County Circuit Court on Friday.

On July 20, Griffin walked into the Hispanic grocery at the corner of Market Street and Main Street in downtown Dayton. She yelled at the clerk and tore down a large Mexican flag hanging in the store, the store’s owner, Gilberto Mejia, told Dayton Police Officer Justin Jackson, according to Jackson’s report. She left the store with the flag, and pushed and kicked the door on her way out, reportedly damaging a hinge.

Griffin then called Mejia on his cell phone and left a message in which she told him to “learn to speak English or get out.” She also told him that hanging the Mexican flag inside America was wrong, according to Jackson’s report.

Jackson went to Griffin’s home in Dayton and had her write out a statement about the incident. She also returned Mejia’s flag, to which she had attached a business card. She had written on the card, “Speak English or leave!” and “Remember the Alamo!” Jackson reported. 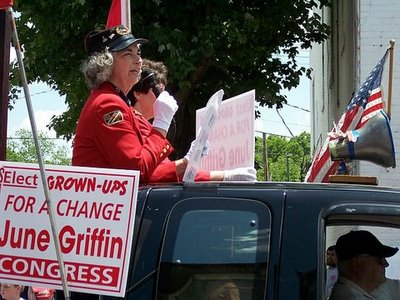 More on the story, from the Chattanooga website nooga.com:

Wednesday, August 9, 2006 — June Griffin, 67, well-known political activist in the Chattanooga and East Tennessee area, was booked yesterday at the Rhea County jail on charges of theft, vandalism and violation of civil rights. Operators of a Mexican restaurant in Dayton told police she stole their Mexican flag off a door at the eatery recently. She posted bonded and was released from jail the same day.

Here is what Ms. Griffin had to say about the incident:

“After the Rhea County Commission meeting the 18th of July, I was traveling toward home from the meeting and passed the latest innovation to the city of Dayton – a Mexican grocery store. Plastered with Spanish, it irked me to see that there was such a monstrosity right in the heart of our little town.

“I went into the store and a young man sat there and could speak no American at all. I looked around and saw a small Mexican flag stuck to the back door. Seeing this effrontery, I tore it off the door and left. Of all the nerve! It was not stolen; it was an act of war! I have no respect for this kind of force.

“The next day or two I saw they had put up another, LARGER one in the front window. I went to a lot of trouble calling the property assessor’s office to see who owned this building, which was formerly Roger’s Drug Store. I was finally given the name of a Mexican and calling this number, heard one which I assumed was a Mexican speaking Spanish answer the machine and leaving some unintelligible message. I then said in so many English words that I didn’t appreciate their having a Mexican flag in downtown Dayton and asked them to remove it.

“A day or two later, I had a call from the City Police Officer who asked me if I was the one who removed the flag. I said yes. He then said words which I value more than much silver – he said, “I knew you would tell me the truth.” Where in this vain and wicked age can you find people whose word is their bond and the police officer would say, ‘I knew you would tell me the truth.’ It was a special blessing.

At any rate, days went by until today, August 8, 206, I received a call from Chief of Police Chris Sneed who told me there was an arrest warrant waiting for me at the jail and I needed to come down and sign some papers. The papers included booking me for theft, vandalism and violation of civil rights (!). After I was fingerprinted, I was allowed to bond on a $5,00 bond and put down $512.0 to save me from jail.

The hearing is today. It is an honor to suffer for your country’s sake, even if it is in a Culture War and an insidious invasion by people who think we are helpless little pigs who have no defender. They are wrong. I have a Great Defender. His Name is Jesus Christ the Righteous, the One Who was with Daniel in the lion’s den, and the One Who stood by Charles Finney and a thousand hosts of preachers and Christians who have been persecuted for righteousness’ sake.

If there is anyone out there who knows how to reach the Mexican Consulate, would you be so kind as to send this to him for me.

TO THE MEXICAN CONSULATE:

Of all the nerve, your people come into our town, speak Spanish, put up their alien flags and expect us to take it laying down.

If all the officials are cowards, if all the businessmen are lawless capitalists, and all the people helpless under cowardly, unpatriotic leadership, I will do what I can as one individual to show my displeasure and love of my country.

You can be sure the inactivity on the part of veterans and patriots is no sign of love for your effrontery or that their hearts are not grieved and broken. They just wait for the Lord to execute His Wrath as He did in avenging the death of Davy Crockett.”