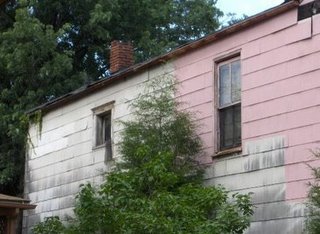 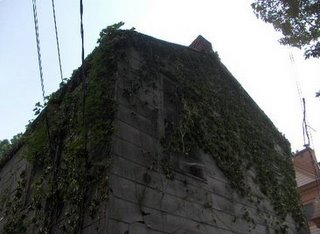 My great concern is not whether you have failed, but whether you are content with your failure … Abraham Lincoln

Regular readers know all too well that a continuing theme in New Albany’s long-running saga of socio-political dysfunction is a peculiar and persistent – some would say purely intentional – disconnect between our generally adequate rules of law and our woefully inefficient mechanisms of enforcement.

For almost four months, Ann Streckfus’s Diggin’ in the Dirt blog has been documenting just one sadly indicative, localized example of this citywide phenomenon of the New Albany Syndrome at its most frustrating and inexcusable: A wretched house owned by unresponsive people at 525 East Market Street.

Ann’s story began in April. Her elderly mother, who lives adjacent to the crumbling structure, began to find it impossible to use the bird feeders in her own yard without attracting the unwanted patronage of a burgeoning colony of rats residing amidst the obvious and escalating squalor next door.

Subsequent efforts on Ann’s part to draw the attention of various public officials to this deteriorating situation, something unfolding at a house that had been previously cited (sans follow-up enforcement – need you have asked?) by a former building commissioner in 1990 – that’s right, 1990 – have included pointing out to both local and state health departments that rats were running rampant, approaching an agency for protective services with the information that a baby was until recently cohabitating with the rats, and observing that bricks were falling from the chimney and garbage was visible in the yard.

Eventually Ann spoke with the incumbent building commissioner, Ron Hartman, who first reviewed with her the usual reasons why New Albany could do nothing about such a mess, but then actually went so far as to stage a Potemkin “condemnation” of the house so as to attract the laggardly attention of the derelict owner, and when he apparently briefly gained it, apparently ordered the house to be painted and repaired … (“or else,” finger wagging, stern visage, scruffball homeowner giggling) … with vinyl siding, among other helpful suggestions.

It would appear that the building commissioner knew nothing of the house’s inclusion in a historic district, and the rules governing exterior repairs for structures in these places – rules we as a city have agreed are necessary … at least until it comes time to enforce them.

Surreally, Ann duly quotes Hartman: “”If those people (meaning the Historical Preservation Commission) have rules that need to be followed, they need to tell the people about them.”

And while they’re at it, they might tell him, to.

Concurrently, various procedural reasons have been offered by the state health officials as to why the rats could not be poisoned without endangering other animals, and in essence, that to demolish the pestilent house would simply scatter the vermin throughout the neighborhood.

At this point in time, virtually every entity involved with the story of the house at 525 East Market has had his or her cage rattled – in some respects, over an expanding period of decades, but the only sure conclusion that can be drawn from the tale is that the rats are still there, proliferating, and Ann’s mother is still unable to feed the birds.

And, New Albany refuses to become engaged in its own self-preservation.

Earlier this summer, the well-meaning city operations director Tony Toran issued a statement that addressed the problems of recurring ordinance violations, focusing on the responsibility of individuals to know the rules and keep their premises clean.

Shortly thereafter, the long dormant and bizarrely nonchalant local Democratic political machine finally managed to bestir itself to recognizing the existence of a problem, and announced monthly volunteer clean-ups of embarrassing areas within the city.

Apart from these welcomed but largely toothless pronouncements, NA Confidential is unaware of any official policy position emanating either from public official or party hack, Democrat, Republican or Libertarian, that proposes in any meaningful way an examination of the root causes of the city’s inability to enforce its own laws.

To date, the search for a local politician or governmental official with the simple courage and basic leadership skills to meaningfully address the fundamental underlying issues of our culture of non-enforcement, the absence of property inspections, the glorification of the slumlord … the causes of the problem that volunteer clean-up band-aids can never hope to cure … dismally proceeds, and there have been no takers with regard to NA Confidential’s challenge for New Albany’s ruling class to expend a dollop of its political capital, to offer a vision for change, and for once in the city’s recent history, to fight a good fight for a cause that stands to make a difference in people’s lives and the city’s future.

Why is it that we seem to possess no one with such vision, no one with the guts, no one with such resolve … not a “leader” to be found capable of principled aggressiveness rather than shopworn passivity? Capable of advocating and obtaining enforcement mechanisms with an adequate legal structure and sufficient funding to enable a prospect of success rather than to guarantee a continuance of failure? Capable of the human will to achieve and to make demonstrable progress in cleaning up New Albany?

Is it really something in the water?

Here are links to the original Diggin’ in the Dirt postings.

July 12
Back to the Salt Mines