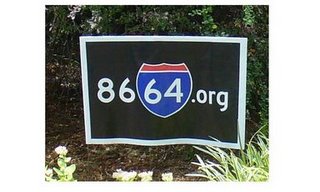 (See Ed’s photo of the Mishawaka pedestrian/bicycle bridge here. In a comment, he suggested it as a model for the Greenway’s Silver Creek crossing)

Last week’s encounter with Tyler “8664” Allen got me to thinking about Louisville and the city’s weirdly dysfunctional relationship with bridges: 8664: It’s never too late to start all over again.

One existing bridge (the Kennedy, on I-65) currently defies all efforts to paint it.

Another existing bridge, the K & I, used to carry vehicular traffic and could be used again to serve pedestrians and cyclists … but the railroad is against it.

The Louisville metro area has desperately needed an East End bridge for decades, but in order to even consider building it, there apparently must be Prospect-ordained penance in the form of another downtown bridge alongside the Kennedy, and the subsequent expansion of the waterfront interstate, with incredibly deleterious effects for everything the city has tried to achieve in recent years with respect to reconnecting with its river.

In Indiana, yet another bridge is proposed to be built in a place where it should not be, and for mostly wrong reasons. Most of us now grasp that the previously unappreciated value of the Loop Island Wetlands is such that the thought of building a bridge for passenger traffic through it, as stipulated by the master plan for the Ohio River Greenway, is sheer insanity.

And yet, it remains part of the plan, with the saving grace that no money is available to make it reality. It’s heartening that more and more residents of Southern Indiana see what the Greenway might be, and how the plan must be changed to make it better.

Our Greenway Commission representative, Valla Ann Bolovschak, has expended much effort with the Norfolk Southern in advocacy of the K & I pedway idea, and she’s also in the right place at the right time when it comes to adjustments to a Greenway plan that has become wildly outdated since its mid-1990’s inception.

Ms. Bolovschak originally penned the following as a submission to a local newspaper, and has given permission for it to be published here. It is a strong summation of the ideal of 8664, and for what needs to be happening in terms of future thinking in the metro Louisville area, which has arrived at a juncture where traditional modes of brick-and-mortar planning might well be permitted to decimate the progress so painstakingly achieved in the recent past.

I made a trip to Chicago in June with Ray Irvin, INDOT’s executive director of Greenways. We bicycled the Greenways along the waterfront and all throughout downtown Chicago, snapping pictures of one of the most vibrant downtown waterfronts in the country, alive with bikers, roller bladders, moms with strollers, walkers and joggers. In some areas Chicago has three separate Greenways right next to each other along their water front. Only a few years ago, they eliminated the downtown airport on Lake Michigan, putting in its place more park and Greenway space. Within the third largest city in America, dozens of gorgeous condominium buildings are being built as the views of the water and the parks are spectacular, revitalizing areas inside the city that no one would have ever dreamed would be anything but a playground for criminal mischief.

Early July, I took a trip to Milwaukee and witnessed the same. Greenways and parks line Lake Michigan, separating the city from the lake with acres of lush space. Bikers and joggers are everywhere. Milwaukee is in the middle of an enormous highway reconstruction project and none of it is having any impact on their green space. In communities all around Milwaukee, they have magnificent Greenways tying communities and parks together and the impact this has had along the Greenway corridors is obvious. What used to be little sleepy downtowns, like ours, are now thriving with redevelopment in high gear.

The argument of a longer commute made possible by the elimination of I-64 has no merit to my family, who would offer up additional commute time, in exchange for the damage that would be caused by increasing the size of concrete over the city and its Greenways. It was wrong 45 years ago and it’s worse now because Louisville has invested so much to successfully energize downtown.

I am one who believes 8664 can happen, should happen and will happen. People in Portland, Oregon, Seattle, Milwaukee and Chicago, realizing the magnificent asset their waterfronts are, are doing the right things to protect them, eliminating highways by burying them and rerouting them. We need to emulate these larger communities who face much larger hurdles than Louisville even has to. They are succeeding in creating unprecedented downtown revitalization and we should be following in their foot steps by vigorously protecting and enhancing our water front asset too.

I’m proud to know Tyler Allen and I will support him and this cause in anyway that I can. Smart people get together and figure things out. They don’t hide and ignore matters with consequences of the magnitude this project could result in. And that is what we all need to do, figure this out and not spend a billion dollars destroying downtown Louisville, throwing paint on the very face of our Mona Lisa.