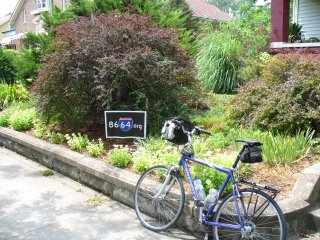 What began as a simple plan to have an informative Wednesday lunch at the Bistro New Albany with Tyler “8664” Allen, Louisville’s leading proponent of “taking back the riverfront,” and Randy Smith, New Albany blogger and bookstore owner, turned into a full-tilt information overload.

Our meeting didn’t come to a close until a full hour after the plates had been taken away and the last Croupiers drained.

That’s because under the Farmers Market canopy, Tyler spread out huge banner-sized photographic enlargements of aerial views of Louisville area highways, some showing the changes proposed by the dual (downtown and East End) bridge project, and others how it might be if two miles of waterfront expressway were struck from the map and replaced with a revolutionary idea to put smart growth principles into action.

For an audience of one, Tyler was on his hands and knees, gesturing and pointing, and explaining how his campaign — quite possibly the grassroots campaign that comes along only once in a generation — might actually work.

Yea or nay, Tyler’s 8664 campaign should not be regarded as a fluke, or something that has come along too late in the game to matter. It simply isn’t true, and the ideas deserve a hearing. Most of those expressing doubts either haven’t taken the time to consider what the roadway construction implies in a future tense, or are representative of the dismissively stodgy unresponsiveness that led to the monstrous riverfront concrete freeway in the first place – just four decades further along, and intent now upon not properly examining the earlier mistake, and in fact perpetuating it with a billion dollars of impediment to the principles best placed to further Louisville’s downtown revitalization.

Rather than offer recaps, permit me instead to provide directions to the official website (and to reprint the FAQ section from it): 8664.

What is 8664?
8664 is a plan to remove Interstate 64 from Louisville’s waterfront. “86” is slang that means to remove or get rid of something. The idea is to realign I-64 onto I-265 in KY and IN after an upriver bridge is completed. This will redirect cross-country traffic (mainly trucks) around the city and improve access to and from downtown. It will also allow us to tear down the waterfront expressway from I-65 to west 15th Street. The 8664 vision should improve downtown and be less expensive than the planned Ohio River Bridges Project.

What is the Ohio River Bridges Project?
The planned Ohio River Bridges Project is a massive $2.5 Billion road-building project that will build two bridges and triple the size of Spaghetti Junction. How will it affect downtown? I-64 across Waterfront Park will get 50% wider and Spaghetti Junction will expand to 23 lanes wide. The result will be more noise, traffic and air pollution. Additionally, the huge expansion in roads will cause “induced traffic” that will fuel eastward sprawl development and reduced investment in downtown.

Why remove the waterfront expressway?
Louisville is here because of the Ohio River. When we built an expressway between the city and the Ohio River, we cut off our connection to our past and our greatest natural resources. Waterfront Park is a good example of the positive impact our waterfront can have on our city, but it’s time to take the next step. San Francisco, Portland and Milwaukee have all removed waterfront expressways and seen dramatic increases in urban investment and improved livability. It’s time for everyone – on both sides of the river – to come together around an exciting vision for the future of our community.

Where will all the traffic go?
Our regional transportation system will have many years to adapt to the removal of the Waterfront Expressway. When I-64 is realigned onto I-265, it will serve as a bypass for interstate traffic. An “at-grade” or ground-level boulevard – similar to River Road – will provide access to and through downtown from the east and west ends. Removing capacity across our waterfront will also naturally spread traffic over the larger urban street grid. The benefit of this redistribution will be improved vibrancy and economic investment in under-used or under-served areas of downtown. A comprehensive traffic study should be conducted to evaluate the 8664 plan.