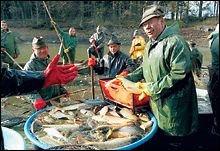 Readers will recall that the obstructionist 1st district councilman once proposed to completely disengage the city of New Albany from the Scribner Place redevelopment project, entrusting it instead to the YMCA – an entity whose previous record of organizational competence rendered it far more trustworthy in his eyes than those governmental mechanisms of which CM Coffey is intimately part and parcel, but which he congenitally mistrusts and generally finds useful in daily life only as a starting point for flagrant demagoguery.

Consequently, and to put it mildly, it is highly ironic that with New Albany, Floyd County and the Caesar’s Foundation all having made the Scribner Place race in reasonably good condition, it is the previously unimpeachable YMCA itself that now huffs, wheezes and puffs with the finishing line in sight.

The truth is, none of us really know.

The story broke in the Courier-Journal on Saturday, and was reported by the Tribune on Sunday morning. The two local mainstream media accounts are in general agreement as to the central point: The Y’s eleventh-hour financial snags could result in the project’s rebidding, with potentially higher costs, with the unfortunate possibility that all of the intricate and hard-fought financial arrangements in the public sphere might be subject to further vicious rounds of reconsideration – not to mention recrimination, a house specialty of the area’s Brambleberry end-time sect.

New Albany’s Scribner Place could become smaller, costlier or both.

… with the Gang of Four News Agency (GFNA) sponsoring this:

Readers are invited to compare and contrast the tone of the two reports. I detect the usual C-J shading toward the sensationalistic, and find the Tribune account more measured, owing perhaps to an extra day’s time to investigate. As an example, Tribune reporter Campbell notes:

Mayor James Garner said all parties plan to meet Monday and see if the finances could come through ahead of schedule. If not, Garner said, the bidders could be asked to voluntarily extend the length of their bids.

This option is not referenced by the C-J’s Hershberg, who instead assesses at-large councilman Jack Messer’s reaction:

Jack Messer, a member of the New Albany City Council, described the problem as “a major, major setback.”

If the complex is delayed and must be rebid, Messer said, costs could go up substantially.

He said “it could open the door” to members of the public and council who oppose the $20 million development.

When this latest in a series of melodramatic crises is surmounted, construction actually begins, and the Scribner Place project finally is completed in two years’ time, it will have taken about as long for it to pass from conception to realization as did the Sherman Minton Bridge, and it is likely to have aroused more passions along the way, at least among the minority in the community willing to venture an opinion on the topic — which is pathetically small, indeed.

Unfortunately –- but not unexpectedly –- much of the discussion recently generated by Scribner Place within the local blogosphere has embraced largely unrelated political and personal aspects of city life rather than pertaining to the merits of the project itself and its position in the context of significant attendant issues such as urban redevelopment and downtown revitalization.

As the current story unfolds over the next few working days, all New Albanians with an interest in the city’s progress will be watching, as well as some for whom regress is the chosen antidote to achievement.

Now, as before, NA Confidential numbers itself among the former. We’ll report back later in the week.