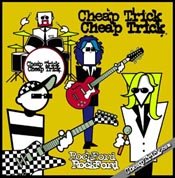 When the Rolling Stones played at halftime of the most recent Stupor Bowl in February, the most visibly energetic of the three remaining original band members was neither the perpetually strutting Mick Jagger nor an elegantly wasted Keith Richards. Rather, it was drummer Charlie Watts, whose stage presence over the course of four decades might be compared to a vase of flowers – albeit with syncopated wrists always swinging the beat near the petals.

Last fall, the amazing, jazzy Ginger Baker reunited with his Cream band mates for a series of concerts, their first genuine stage performances together since the Nixon presidency.

Somewhere in the world, the great Zak Starkey’s dad Ringo is touring with his All-Starr band, entertaining thousands and confirming for new generations that there was a very musical reason why the Beatles didn’t launch into the stratosphere until Pete Best was given his walking papers.

Then there’s the amazingly youthful Cheap Trick, whose excellent new album, “Rockford,” has been the highlight of my musical summer to date.

Specifically, my happiness derives from a tiny snippet of unadulterated bliss that occurs during “Perfect Stranger,” the first single. There is a break just after the first chorus, leading to the bridge, where drummer Bun E. Carlos plays a brief and sublime Keith Moon-style drum roll, with requisite cymbal crashes, as Rick Nielsen wrings the length of his guitar neck in a pure expression of air axe parody, that seventies show rock shtick with which we’re all too familiar, but far more joyously, with conscious self-knowledge of how delightfully cool it must be for a fifty-something male to get away with such plainly adolescent behavior – and get paid for it.

The album’s a veritable clinic of good times and summer party grooves … and so what if most of the listeners turn out to be as old as the band itself? Let’s hope there’s much more to come.