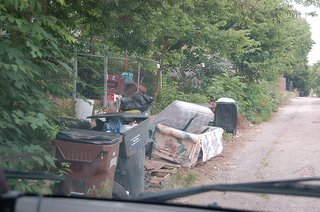 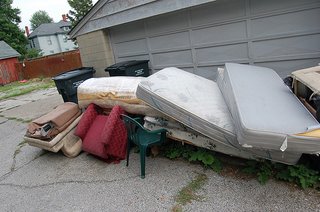 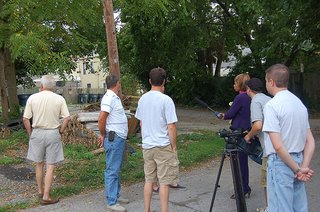 On Monday night, WLKY-32 devoted two solid minutes of local television news time to New Albany’s enduring culture of non-compliance with the rule of law, and I’d like to publicly thank our neighbors, who met with the station’s reporter earlier in the day, toured fouled alleyways and covered the major aspects of the New Albany Syndrome.

It’s embarrassing to see these ugly scenes on television, knowing that they’ll only reinforce negative stereotypes that so many earnest citizens are trying so hard to dispel, but it is medicine that we must take if there’s any hope of improvement, and it points unmistakably toward an uncomfortable, recurring reality.

Taken as a whole, and in spite of regular reminders of intense interest from the citizenry, New Albany’s governing class remains willfully impotent and bizarrely detached from community concerns like these. While pointing to such obvious administrative and legislative dysfunctions does not excuse the obligation we all share to take part in the life of our streets and neighborhoods, it is a galling dysfunction nonetheless, and one that reaches across party designations and political philosophies into more than a few utterly vacant craniums.

What will it take for our local governing officials, and perhaps more importantly, their political parties, to make a stand and to take a position on matters of importance at the grassroots level?

But isn’t it these elected time servers who should be most embarrassed by metro viewers guffawing at video images of an unreconstructed cityscape filled with garbage, refuse and litter?

After all, as we’ve noted here time and time again, an honest and comprehensive assessment of New Albany’s post-war municipal history leaves us with precious little good to say about those who’ve been entrusted with leadership, but who at various times have lacked vision, imagination, understanding and courage when it comes to platforms of governance.

How else to explain the de facto slumlord protection program lovingly put into place in New Albany over the decades? Absentee-owned rental properties have been allowed to proliferate without the slightest effort at organization and regulation, and it doesn’t take Albert Einstein to instinctively grasp why unregulated and decrepit absentee rental properties, neighborhood decay and contempt for the rule of law go together like rats, insects — and uncollected garbage.

To paraphrase: New Albany’s myriad compliance failings are a design issue as much as a law enforcement issue.

The current code enforcement system is a start, albeit one that required too many months to enact, but it’s only a small beginning. Unfortunately, it is designed to be ineffective, and will remain ineffective irrespective of the considerable talents and hard work of the OEO.

The necessary dots simply are not connected, the monies remain uncollected, and we’re still searching for the first elected official who will risk an iota of political capital to do what needs to be done for this or any other system to be effective.

What has prevented New Albany’s governing class as it is presently composed – some members of which have often said the right things and indicated some level of comprehension – from taking meaningful administrative and legislative steps to help alleviate the problems?

What prevents the city council and the mayor, together or apart, from enacting the sweeping reforms that are required for New Albany to become a better place to live and work?

At least, nothing beyond the timidity, mediocrity and unresponsiveness of elected and appointed officials alike, and the self-defeating, fence-sitting political parties that sponsor their candidacies.