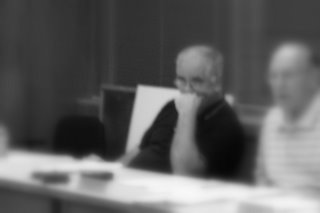 The malignant political virus known as Coffeyism, while undoubtedly an intimidating, dishonorable and morose collection of simplistic chemical reactions to complex external stimuli, cannot be said to be systematic in any meaningful way.

With dark origins as an angry personal doctrine of contempt for progress and modernity, and one that remains utterly dependent on a virulent and often self-defeating anti-intellectualism, Coffeyism almost certainly defies convenient organization into predictable habits of thought.

Rather, Coffeyism at its most basic and self-aggrandizing – a level that it rarely so much as attempts to exceed – is vigorously opposed to all meaningful habits of thought, which are associated by the virus’s namesake with education, improvement and achievement – and although these attainments are laudable and sought-after at most levels of functional human society, here or elsewhere in the world, they act as handy straw men and imaginary bugaboos in the interior logic of the Coffeyite, and thus are to be suspected, despised and hectored during the course of perpetual opposition.

Given these realities of Coffeyism and its concurrent absence of ironic detachment, it is perhaps unlikely that the city’s Coffeyites would ever truly appreciate the zaniness of the scene at last Thursday’s city council meeting, during which both 1st District councilman Dan Coffey and loyal 19th-century acolyte from the 3rd District, Steve Price, expressed the stark urgency of stopping the world from turning on its axis until trained accounting professionals come to audit New Albany’s books and explain the true meaning of the ciphering to the Siamese Councilmen and their adulatory fan club of Luddites, obstructionists and Brambleberries.

And yet, gripped by the malevolent fever of anti-intellectual envy, how many times have these same two councilmen ritualistically abused and denounced the numerous trained professionals dispatched to testify before them about issues ranging from drainage to sewers to zoning codes?

When is a trained professional not a tool of the hated regime?

Apparently, only when Dan Coffey says so.

Albeit it somewhat metaphorically, both local news organs devote Sunday column inches to the excremental New Albany phenomenon of Coffeyism, with the New Albany Tribune considering CM Coffey’s sacramental use of the “audit” as a magic Jedi light saber to smite down his hoity-toity enemies, and the Courier-Journal favorably examining the good prospects for the Scribner Place redevelopment project.

An audit is not the answer; Resolution not going to provide answers promised, by John Tucker (Publisher of the Tribune):

Coffey seems to thrive on capitalizing on the people’s mistrust of government. He continually throws out allegations and innuendos without backing up his bravado. Yelling for an audit plays to the fears and mistrust of the public. It also diverts attention from the performance or lack of performance from the council – something that Coffey is a pro at doing (make no mistake, it was not a coincidence that Coffey came up with the audit idea right after it became apparent that the public did not appreciate his latest attempted murder of Scribner Place).

A motley collection of audit proponents from the citizenry, including at least one prominent and colorfully charismatic female Republican, has long since joined the acrimonious Coffeyite faction of non-democratic Democrats to perform syncopated and dizzily gyrating mating dances of varying intensity, and CM Coffey’s resolution might have been floated at any juncture therein, but it was held back as a tactical maneuver that became necessary when the Wizard’s ham-fisted, anti-revitalization Scribner Place “resolution” was peppered with buckshot emanating from all parts of the community.

In short, John Tucker scores again, and the Tribune continues its ascendancy to a position of relevance in New Albany.

Eric Kelly, a professor of urban planning at Ball State University in Muncie, said municipal investments such as Scribner Place show that a community is serious about renewing its downtown, which can work wonders.

He has seen that happen in Muncie, where many professional households moved downtown in the past five years after the city spent money refurbishing the area.

The rebirth of community downtowns is a recent phenomenon nationally, and Kelly said Scribner Place could draw New Albany into that revolution by attracting people to live downtown, the first step toward center-city rebirth.

“They expect to have 500 car visits as day,” Wilson said, and that would be an enormous increase in visitors.

… and Paul Wheatley, New Albany’s economic development director, who describes a study undertaken by the Browning Investment Group of Indianapolis, which “has conducted a study of what Scribner Place can attract, most likely on city-owned land near the YMCA and swimming pool.”

Of course, almost from the beginning of the Scribner Place debate, the YMCA’s eagerness to spend $8 million, and the Caesar’s Foundation’s $20 million commitment to make the project come to fruition have combined to present the project’s dysfunctional critics with myriad logical and rhetorical dilemmas. If both these efficiently operated and well established organizations see Scribner Place as a plus, and are perfectly willing to put their monies on the table, then arguing against the city’s comparatively small investment becomes exceedingly difficult.

Consequently, when taken as a mounting whole, and considering the voluminous available testimony and laboriously compiled evidence on behalf of Scribner Place’s prospects, whether provided by ordinary citizens, city hall or trained professionals – whether articulated by the YMCA itself, Caesar’s, numerous downtown businessman, prospective investors or reputable studies – comprising Democrats, Republicans, churchgoers, atheists, and on and on and on … it becomes obvious that a comprehensive and broad mandate in favor of Scribner Place undoubtedly exists here in the city of New Albany.

And what then of the self-appointed “leader” of those opposing the project – the same councilman who was heard demanding no less than the finest trained professionals to perform his pet audit project?

New Albany City Councilman Dan Coffey is skeptical about the impact (of Scribner Place). “I think it will be limited,” Coffey said. But “I could be wrong.”

No facts, studies, or research.

No appeal to reasoning, justification or support.

No point of reference beyond his own expansive ego.

Nothing except “I think,” and the thoroughly disingenuous and insincere addendum, “I could be wrong.” Just malice, envy and the face staring back at him each morning while shaving — and waiting to be transformed into public policy proposals.

The double standard practiced by Dan Coffey is obvious, ludicrous and damning.

When it comes to the purely political objectives of his cherished audit, CM Coffey proposes to spend top dollar for the best available trained professional – and when it comes to Scribner Place, and by extension, to the very principles of downtown revitalization that the city needs so desperately embrace – there’s not a trained professional on the planet whose expert testimony CM Coffey would be willing to accept. Ever.

There may be a trace of leadership in CM Coffey’s machinations, but only in the sense that the first lemming in the queue will plunge off the cliff and then be followed in short order by the remainder of the gang.

Dan Coffey is the living, breathing exponent of the satirical office memo topic: “The Beatings Will Continue Until Morale Improves.”

But he’s not joking, is he?

See also: On driving a stake through the toxic heart of the New Albany Syndrome, in NAC (Tuesday, June 13, 2006).