Amidst arguments of waste and want, I thought it might be informative to compare New Albany’s financial situation with those of other, similarly populated Indiana cities with particular regard for labor expenditures. Why labor? Because it’s commonly understood that if you want something done in a professional environment, you have to pay for someone to do it. And, currently in New Albany, things aren’t being done. Revenues and fines that could be collected aren’t. Codes that should be enforced aren’t. The list goes on.

Let me first say that I’m not a statistician. This isn’t a comprehensive report but a legitimate attempt at a quick snapshot to spur conversation about community expectations and values. I did not adjust for specific anomalies that may or may not be present owing to my ignorance of them. I chose comparative cities based solely on their populations’ proximity to New Albany’s 36,973 using 2003 data from the Internet. Those populations range from 43,083 to 30,609. Besides New Albany, cities included are: Carmel, Columbus, East Chicago, Greenwood, Lawrence, Marion, Michigan City, Portage, and Richmond.

Basically, I used Internet data, most from 2004 but some from 2002, to compare how much the various cities spend on employees. Below are the results, showing the mean and median for each category and how New Albany compares. 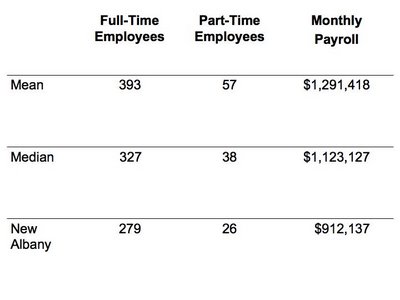 Notes: New Albany’s figures, from March 2004, include 33 sanitation employees at $74,446 per month. Granger and Merrillville, with populations of ~31,000 and 30,990 respectively, were not included because of a lack of reliable data.

A quick refresher on mean and median calculations is available from Robert Niles here.

If one does some quick math, there’s an indication that several cities of our approximate size spend much more money for many more employees to complete tasks and provide services. Using the median scores, New Albany is “down” 48 full-time employees, 12 part-time employees, and $210, 990 in monthly payroll ($2,531,880 per year).

I’ll leave it to readers to determine what that means.