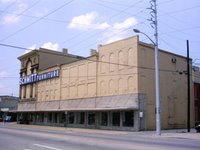 It’s a holiday weekend, so you might as well become acclimated to reruns.

Original content will return soon … and until then, I’m trying to be somewhat topical in selecting topics for the “rewind” function, as in the case of today’s front-page Tribune story on Schmitt Furniture (written by Chris Morris).

Schmitt is celebrating its 70th anniversary this year, and the company deserves every conceivable plaudit for sticking to the “Furniture Corner of State and Main” throughout often difficult times for New Albany’s once vibrant downtown business district.

In Morris’s article, the Schmitt family is credited for yielding properties to make way for Scribner Place, and current company president Louis Schmitt is quoted as saying, “Let the renaissance begin.”

We are in perfect, lockstep, 100% agreement with Mr. Schmitt’s sentiment, and once Scribner Place is attracting people to downtown, it’s going to be wonderful to see Schmitt Furniture leading the way forward by restoring the building’s formidable, signature façade.

In the coming years, you’ll be able to measure the progress of this renaissance by the number of windows that (re)appear on downtown buildings.

From Schmitt Furniture’s web site, here’s a tiny view of what the building may have looked like at one time. They sure look like windows to us, and if any of the local historians have any further information or photos, please pass it along for publication.

Thursday, August 4, 2005: And now we return to “Windowless Views of Scribner Place.”