I was riding my bike up Market Street on Tuesday evening when Dave Thrasher hailed me from the open door of his Art Store, and we chatted for a few minutes about a few of many of his outstanding ideas for incorporating art into the revitalization of downtown New Albany.

Back in December, 2005, a similar conversation with Dave led to this article.

In the interest of reconciliation and progress, it is understood that we can’t have what we want most of all: Fully staged show trials in which previous generations of New Albany civic “leadership” would be compelled to listen to the recitation of their aesthetic crimes against the municipality and be sentenced to penance.

We’re speaking primarily of the era of the 1960’s and early 1970’s, when classic components of New Albany’s architectural legacy, i.e., the post office and the courthouse, were blithely sacrificed for barren parking lots, formulaic banks festooned with Formica, and sterile socialist-inspired structures that continue to blight the cityscape long after the perpetrators have retired to Florida to escape the eyesores of their making.

However, all is not lost. In other parts of the outside world, creative thinkers rush in where fear-mongering troglodytes fear to tread.

We believe that when it comes to correcting the deficiencies of modern architecture, simple solutions like paint and art are capable of transforming this smudgy river town into a brighter, warmer place.

Consider the monumental task faced by those European countries breaking with Communism, where most cities are ringed with gray blocks of flats erected cheaply and rapidly in the post-war era, many similar in appearance (but varying in size) to this one in Greifswald, located on the Baltic coast in the former GDR: 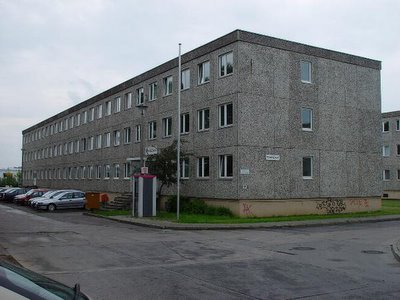 At the risk of oversimplifying the complexities involved with the process of privatizing state-owned apartment blocks, improving the amenities within, and revitalizing neighborhoods outside, it would seem that the most common solution to the simple problem of gray murk has been a coat of paint: 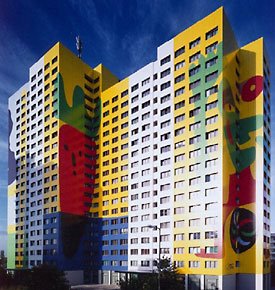 Consider the looming bulk of our Riverview Tower retirement home, a building that would not be out of place in Bucharest or Tirana: 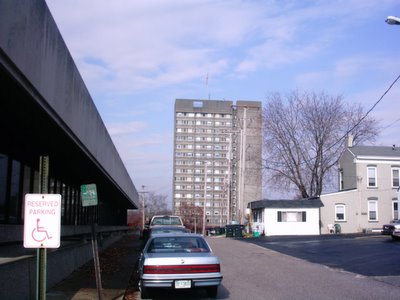 And try to visualize the impact of color, as in this hastily sketched revision: 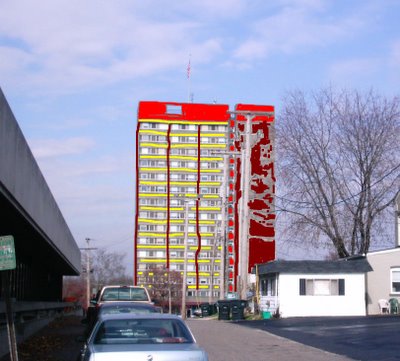 Local residents Dave and Bonnie Thrasher have been leading proponents of public art as a valued pillar of revitalization, and we’ll leave the details to them and so many others who’ve studied the utility of art in this context.

At the same time, while walking to the library yesterday morning, it struck NA Confidential quite forcefully that wall murals and similarly styled artistic renderings are a marvelous way to humanize the windowless walls of public buildings, as in this view from Mexico: 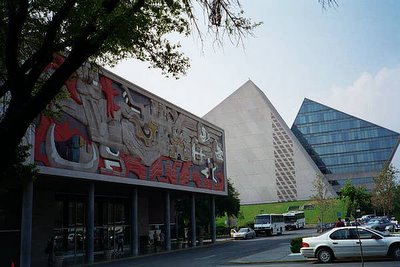 A prominent example of a contemporary structure with a wasted, blank gray wall is the City-County Building: 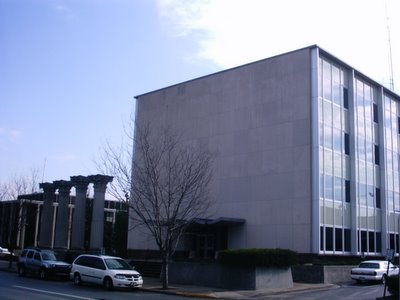 Here’s how it might appear if used as the canvas for a mural: 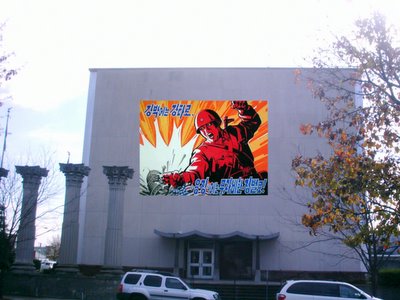 Granted, the scene above is a North Korean anti-imperialist propaganda poster, but you get the drift. I’m seeing an historical scene from New Albany’s past, one that might be realized by a local artist and financed by private fund-raising efforts.

Consider public art a viable plank in the progressive platform … and there’s absolutely no reason why a five-year plan to achieve such a goal cannot be commenced right now.