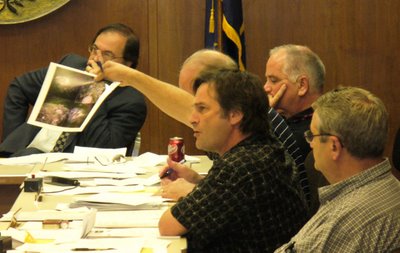 Third District Councilman Steve Price is shown here displaying shocking satellite photos that prove beyond a shadow of a doubt that upwardly mobile pockets of his own council district, especially those located within the boundaries of the S. Ellen Jones and East Spring Street neighborhood associations, harbor subversive cells of uppity New Urbanites intent on bringing fancy-dancy culture to New Albany. 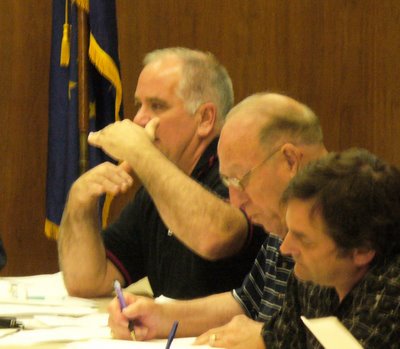 Along with fellow conjoined councilman Dan Coffey (seen here illustrating the maximum height of our aspirations), CM Price led the charge at last night’s council meeting to strip $10,000 from the CDBG (Community Development Block Grant) One-Year Action Plan – money that would have gone toward enrolling people from all the city’s council districts in a program called NeighborWorks – and to place it instead in the moribund dilapidated housing fund, where it might pay for one structure to be removed.

And what is NeighborWorks, which the city’s redevelopment director referred to as the “best purchase” of the entire CDBG program?

NeighborWorks America is a national nonprofit organization that works to revitalize communities through affordable housing opportunities, training, and technical assistance.

The noted political philosopher Jesus once offered a parable to the effect that it’s better to learn how to fish than it is to be given a fish.

NeighborWorks teaches people to revitalize, and the very notion is so frightening to the Siamese Councilmen (and in fairness, to all but two of the council as a whole) that now the money will go toward tearing down a house, and, naturally, there will still be no plan for what goes in its place once the decrepit structure is gone … which is what NeighborWorks teaches people how to do.

After all, simple folks don’t really need education. They need for you to give them a fish, because that fish buys you a vote.

Perhaps Community Housing’s signature Linden Meadows project could leverage the money for in-fill housing where the demolished house once stood – but wait, the Siamese Councilmen and their affiliates have done their level best to thwart Linden Meadows, too.

And all this in spite of expert testimonySCRRAATTCHH … no, that won’t work either, because neither CM Price nor CM Coffey has ever been willing to acknowledge any useful information that comes to them from a person who has made the mistake of gaining expertise through academic or vocational study and the subsequent application of this information in the reality-based world, almost as though plain facts were foul medicines, Limburger cheese or that nasty smell you notice when something has died.

Accordingly, something probably did die last night: Bridgewater Village, a condominium development proposed for a site off Daisy Lane.

Once again, a large contingent of residents turned out to protest the project, and by their doing so, finally we grasp the one issue that unites everyone in the city of New Albany: Daisy Lane, and how it has been ignored, neglected, overused and, quite simply, is so grotesquely wrong in every conceivable way that as community-wide penance, all development in the city must come to a screeching halt, right now, until something is done.

But, something can’t be done because (altogether now) there isn’t any money … although there certainly is money to be derived from development … but shouldn’t those condos be built downtown, where forty years of ineptitude has produced land with no value, even as the earnest homeowners of the Daisy Lane area worked hard to increase the property values in their neighborhood … which makes it the natural location of the proposed condos … except the road is inadequate … and we have no money to fix it … and on, and on, and on it goes, and when the near universal abdication of responsibility on the part of virtually every person in town stops, no one knows.

Now, if you’ve been reading NA Confidential for any length of time, you know how the founder of this blog feels about the populist, ward-heeling and anti-intellectual tendencies regularly emanating from the proudly underachieving right side of the council table, but I’ll tell you this: Last night’s Bridgewater Village proposal was a damned hard call for all nine of the council members to make, including the ones who regularly grandstand and assume poses when such matters arise.

And, collectively, in response to the challenge, what happened?

Sorry, but it’s true. It’s also sad. Faced with a tough decision of the sort that demands wisdom, leadership and a touch of guts – faced with something that they were effusive in praising to the developers in attendance – New Albany’s elected city council abjectly surrendered, effectively serving notice that for the year and a half left in their terms of office, absolutely nothing of a positive nature is going to be allowed to happen in this city – especially if the gleefully obstructionist Gang of Four (councilmen Coffey, Price, Bill Schmidt and Larry Kochert) has any say in the matter.

Call it pure, incendiary, spiteful, solution-free political caterwauling if you will — or as I prefer, just call it by its proper name: Capitulation.

The stress always has been visible on all fronts, but now it’s going bonkers.

We’ve come to a point where CM Price, lacking even the most rudimentary revitalization program of his own, expresses open contempt for neighborhood associations that are the sole entities seeking to add some semblance of value to his own council district, and CM Coffey dismisses with a sneer the testimony of anyone who comes before the council to speak, if that unlucky person does not reside alongside CM Coffey himself or better yet, in the approximate vicinity of whatever plan is being discussed at the time.

The curious thing about this unrelenting madness is that the Siamese Councilman and their generally anonymous sycophants are waging their vindictive vendettas against the modern world in such a way as to defecate in their own nests.

You say Scribner Place is certain to draw investment into the 1st District?

CM Coffey’s against it.

CM Price is against that, too.

It has ceased to be about politics. It’s now about pathology. Their way, or the highway … but when it comes to their way, there’s no there, there — just ever escalating venom.

Just when so many people busting their buns on the ground and at the grassroots are joining to offer hope that New Albany can emerge from the corrosive miasmas of neglect and ignorance – efforts that are beginning at long last to bear fruit – the Gang of Four wants to put a stop to it, to strangle regeneration before it flies out of their control, or at the very least to apply the same leaden fist of uncreative, chortling neglect that’s brought us to the juncture they so often decry and use as an excuse for accomplishing nothing.

What explains this self-destructive oddity? What kind of person acts in opposition to forces that increase value for all? 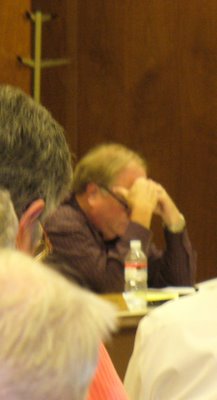 The heavy lifting just got harder for all* of us.

*Apologies to the official voice of righteous doom.