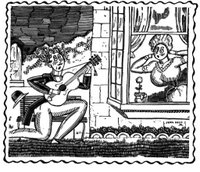 Musically adept readers will immediately recognize the unmistakable twang of the same tired old song wafting down from Dewey Heights, across the rooftops of the city’s third council district, and coming to rest like a trite and mangy tick on the exposed leg of New Albany’s revitalization effort.

The tune is called, “I’ll Nickel and Dime You to Death, Uppity P-Pergessives,” and it is being performed ad nauseam by the district’s own Uncouncilman, whose bizarre glee at relentlessly expounding positions diametrically opposed to the interests of his constituents is matched only by a propensity to spout shopworn homilies in reference to grandma’s soiled piggy bank:

Council to review take-home vehicles; Cars may be kept within New Albany, by Ben Zion Hershberg (The Courier-Journal).

Some New Albany City Council members want to develop a policy for take-home cars that would include restricting their use to employees who live within city limits.

“A lot of the public is really complaining about it,” Councilman Steve Price said, referring to the use of take-home cars by about 70 city employees, most of them in the police department.

Now really, does the public really complain about police protection?

Or, does the forever populist Uncouncilman cannily twist the take-home car message into the form best suited to receive the desired response?

Either way, the pertinent issue – public safety – is lost amid jingoistic clamor as to which policeman lives where, as though residency pertains to the performance of dangerous civic duty.

Of course, CM Price retains the services of the velvet-fogged-up Gang of Four to croon gently lilting back-up harmonies when he dismisses his own council district’s earnest efforts to move forward by drawling the chorus from the only political ditty he has ever bothered to learn: