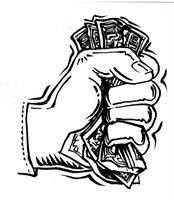 Generations of “leadership” in the city of New Albany were weirdly content to see the historic city center transformed into a dumping ground for both animate and inanimate objects – for people, for garbage, for dilapidated and sub-standard housing, and for the fruits of sloth, venality and plain stupidity.

Now the current generation must determine a way to undo the damage inflicted on the city by the elder political statesmen, all the while bearing the dead weight of numerous residents who decry the problem but continue to support those pillars most dedicated to maintaining it – among them the council’s Gang of Four, the culture of the rental property slumlord and the lowest common denominators of Bud Light, white bread and Wal-Mart.

As we’ve conceded all along, it took decades of neglect to get here, and it will take time to come back from the abyss, and when we pause to consider what is needed to augment embryonic efforts under way on many fronts, one thing is clear: Every little bit helps, and if money can be found to help in the effort, we’d be fools not to take it.

Linden Meadows, a middle income starter home subdivision composed of relocated homes moved by the Community Housing Development Organization from the area taken by hospital expansion to city-owned land, and which finally is underway after months of delays, will bring matching money into New Albany that can be used to rehab and replace decrepit housing.

This much has been clear from the beginning, and yet this no-brainer of a plan has spent close to a year ensnarled in litigation initiated by people concerned that the property in question should not be used in this manner.

I’m not here to argue with the legal process, and I won’t impugn the motives of those in opposition, who have the perfect right to utilize the legal system to make their case – and, concurrently, the obligation to respect the final ruling even if it goes against them.

Rather, as a gauge of the extent to which opponents of Linden Meadows have in fact cooperated in the politicization of the case, whether unwittingly or not, it would be interesting to know the sources of financing for the legal fees incurred in the struggle against the project.

Does the mere mention of this in a public forum imply that NA Confidential dares to suggest certain obstructionist motives are less lofty and more partisan than others?

In the meantime, I’m emphatically lifting a $15.67 pint of progressive ale to the Linden Meadows project and to those who have sought to make it reality in the face of politically motivated opposition, widespread apathy, and less than stellar coverage on the part of local media organs.

In a completely unrelated note, two local blogs have provided links to a glossy magazine profile of Main Street innkeeper and businesswoman Valla Ann Bolovschak, whose milieu is somewhat different than that inhabited by Community Housing – as SOLNA piously reminds us, not better, not worst, just different.

Indeed, there are many paths to a better city, and each of us must do our part to make this a better place to live.

Diggin’ in the Dirt displays the cover of “Today’s Woman,” which is graced by a photo of Valla Ann.

Meanwhile, the spitwad blogyard offshoot known as Freedom of Speech (which doesn’t allow comments) celebrates “THE PATHS OF POWERFUL WOMEN-VALLA ANN BOLOVSCHAK” in typically turgid style – all screaming capital letters, poor grammar, an unattributed excerpt from the magazine article, fawning adulation and a blog author still pathetically clinging to a fictitious identity as a college professor in a futile quest for respectability.

Please, for the sake of all that’s reasonable in the world, go there and read what Erika writes. It should suffice to say that the professorial sham’s not working, although the transgendered creator’s desire to become campaign manager in a future mayoral contest should strike fear in the hearts of those that he/she aims to support.

From the magazine article:

“You should do in your heart of hearts what is right for your community, for your business, for your neighbors,” she (Bolovschak) says.

NA Confidential absolutely agrees with this assessment, and wishes Valla Ann much luck in her quest to free the K & I Bridge for pedestrian and bicycling routes … although when the day comes that the bridge once again is open for use, we don’t expect to see many of the Little People of New Albany strolling across it.

They might fall through the grates, don’t you know?