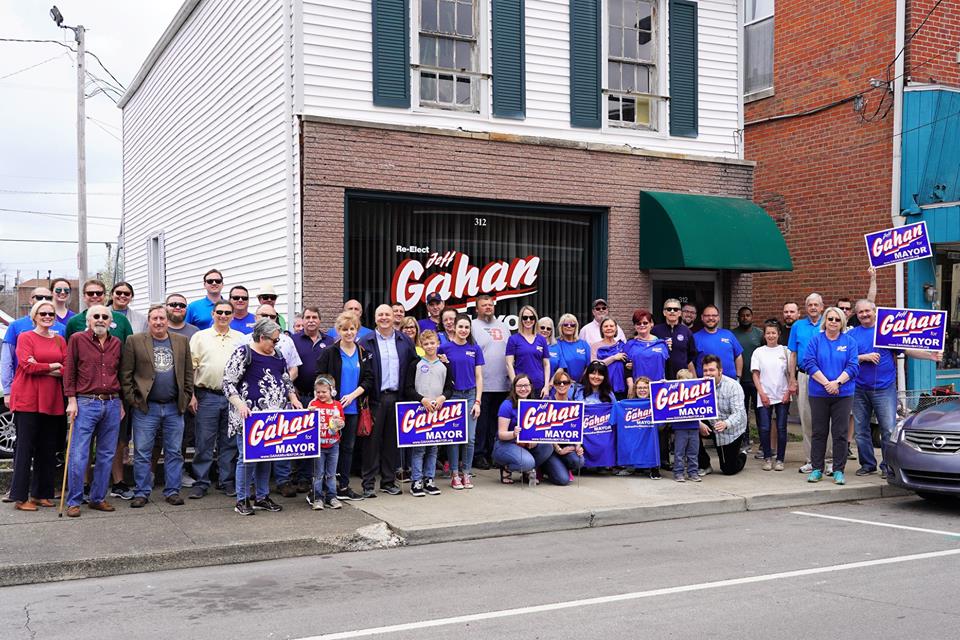 The final time the two of us surreptitiously messaged was in May of 2018.

It had been a year since Jeff Gahan’s hostile takeover of public housing, and the Democratic Party stalwart, who’d surprised me by being so open in expressing disgruntlement with the NAHA putsch, still seemed militant enough.

But I detected an increasingly weary tone.

The experience was surreal, prompting me to question exactly how angry an insider and lifer must become to risk chatting with a unrepentant heretic like me.

In retrospect Gahan easily endured the initial firestorm after seizing NAHA and deposing Bob Lane. The opposition was kept effectively divided through the usual strong-arming and the intimidation of activist public housing residents. Naturally the media lost interest after a few weeks and went back to Cooking School.

Most of the tiny handful of local Democrats willing to express revulsion during the winter of 2017 had diligently normalized their ideological situation a year later. They’d gone to work rationalizing Gahan’s actions as both progressive and preferable to those of Republicans, and when David Duggins “jokingly” threatened to administer a sound tazing to a public housing resident in winter 2018, Democratic wagons were circled even before the tastelessly chosen words left the former redevelopment bag man’s mouth.

The local Democratic party is a personal clique, nothing more, nothing less. Keep your mouth shut and stay in, speak freely and be banished. Anyone who tries to claim membership is some matter of integrity or objective best practice seeking is demonstrating the opposite of both.

As a card-carrying cynic, I knew my newfound correspondent’s dissent was unlikely to endure, and there’d almost inevitably be a return to the warm embrace of the ruling elite. Conscience is one thing, and locating the buttered side of the bread something else.

When you look at Saturday’s team rally photo (above) and see all those people with big jobs and appreciable power in this small pond, you know they owe those jobs and power to Gahan, and to a lesser extent, the Democratic Party itself. In some cases it’s a longstanding family tradition.

Flip? Not a chance.

Flipping is what a “superstar” realtor like Warren Nash used to do with houses. Democrats don’t flip, lest they awaken to a horse’s head atop their satin sheets — or horseradish floating in their Bud Light Mang-O-Ritas.

Over the years as certain local Democrats have behaved very badly, I’ve been told repeatedly by local party leaders past and present that the party could not/would not intervene as they do not take sides in intra-party conflicts. The building pictured above, though, is the Floyd County Democratic Party’s headquarters, supposedly a fair and impartial hub and resource for all local Democrats— unless they’re running against an incumbent, apparently. And, to be clear, there is another Democrat running for mayor. As has already been pointed out, that Gahan sign is a permanent fixture in the window. Per usual, if you support this sort of thing, you’re cordially invited to STFU when any fairness issue pertaining to you arises.

In the end the party allegiance isn’t policy-driven. It’s instinctive, no different from the way our new kitten chases a toy mouse without requiring instructions or an explanation. A better analogy might be basic training in the military, the purpose of which is to instill lifetime habits of call, response and obedience just in case the recruit is needed for the next war.

Ruling cliques operate that way, as do cults. In short, the cream of the crop won’t be surrendering their power without a fight.

$438,000 in campaign finance pay-to-play contributions? Everyone does it, right? Bullying city employees? They should know it comes with the job. Mt. Tabor Road residents doing their homework? They can move if they’re not happy with progress, Gahan-style.

Ah, they’re to be patronized and spoken to like children, as Gahan did on April 2 before an audience of seniors at the Mark Elrod Tower. In the following transcription it doesn’t sound like Gahan even pauses to breathe, and to resurrect a phrase we used back in the blog’s first few years, his babbling is like that of a disembodied pixie on Zoloft.

We have 1,187 units, which is more than anyone in Clark County, any five counties combined, we have more than anyone, and we’re going to keep – that’s the way it’s going to stay, with more opportunities to live here in New Albany than any other place, but what we won’t put up with is sub-standard housing. It’s not, we’re going to make it better, make improvements, and you know I, I feel great about it, and you all should be too – I think you all should be really thrilled about it, because yeah, at the end of the day, you know, with folks out in Seattle, that, there, they can make you know 150,000 dollars a year, 200,000 dollars and they don’t have a place to live, because houses have gotten too expensive for people to live in! And that’s the way it is. And that’s what we’re going to do here, we’re going to do everything, everything to make this a better place, but you have to be right now, you’re feeling super, because this is the best that the city has right here … So anyway, so I know those things, uh, you know we’ve made some changes and when you make changes you make people a little nervous, and I don’t blame ya! I’m the same way, uh, I can just tell you we have some really solid plans that we’re working on now to improve the residents, the residence halls for everyone, and uh, these things don’t happen overnight, everything we do has to be approved at the state level and at the federal level, it’s not like I can just come in here and Dave come in here or the board come in here and make all these changes, these wholesale changes, it doesn’t work that way. It has to be approved all the way up the line and then back, and it includes lots of layers of bureaucracy that we have to deal with, so you know there’ll be no changes overnight, but I have people say, when’s it going to happen? Well, each box has to be checked. But first thing we had to do when Dave came over here was to make sure he understood the condition of each unit. Hell, it’d been years since people had even walked in and knew exactly what was going on in those units. First thing he did was inspect them all. Every one. Every single one. Dave did that. So now we have an idea of what the condition of each unit is, that’s the starting point, and I have to tell ya, it wasn’t really great news. Some were in pretty rough shape – these aren’t, these are super but if you ever had the chance to go see some of the others … right? So I want you to feel good about it, I feel good about it, I feel really great about the future of the New Albany Housing Authority, it has some great leadership there, got a great board, got a great leader in Dave, got committed staff, committed maintenance, and it’s a big part of New Albany, and it’s going to stay that way. Okay? So what other questions do you have, what do you have, what else?

By the way that’s Gahan speaking, not Donald Trump.

Democrats in Louisville and New Albany tend to win a majority of elections regardless of actual policy stances and behavior while in positions of power. Given their dominance, local Democratic voters have had ample opportunity to choose better representation in primaries with a high probability of general election victory. They’ve consistently chosen not to do that, though, with many only inserting themselves in public and quasi-public debates as a matter of challenging challengers, attempting to refute new and different approaches, and, ultimately, in defense of the status quo— all while claiming to strongly desire a change of direction. Here in little ol’ New Albany alone, I’ve listened for more than a decade as any number of even sometimes high ranking Democratic operatives have privately lamented the ignorance, churlishness, dishonesty, etc., etc., of incumbents. And then they put the incumbent’s sign in their yard and publicly praise them during the primary. That’s not policy, folks. That’s personal status protection.

I almost forgot. The Democratic stalwart who was so upset with Gahan’s public housing putsch is standing right there, in the above photo, back among the cliquish ruling elite. Back to where we all belong, if belonging to something like that is a certifiable goal in life.

Quite frankly, it saddens me. The Kool-Aid is strong, and they are weak. Maybe some day this will change, and we can institute non-partisan local elections.