ON THE AVENUES: Notes on Solidarity after a visit to the European Solidarity Centre in Gdansk.

I was an employee of the East Berlin parks department for three weeks in August, 1989. This gig came courtesy of an international student exchange program, and somewhere in a banker’s box downstairs there’s an identity card to prove it.

At the end of each working week a pay packet waited behind a smudgy cubicle window inside the commissary building, where a glowering elderly employee handed me a glistening new 100 Ostmark note. It was non-redeemable in hard currency, but had it actually been real money, perhaps I’d have had enough to pay for an outing to an Applebees’s back home in the States.

I’m tempted to note that at the time, there was no such thing as a chain restaurant in East Germany. Maybe not in the American sense, but seeing as every restaurant in the country was owned by the government, “chain” actually falls somewhat short as a descriptor.

As for being compelled to blatantly fabricate my student status in order to take advantage of this rare opportunity to experience the German Democratic Republic on the cheap, I rationalized these white lies in the context of international espionage.

Surely the CIA would approve of this tactic when it came time to question me.

The point of this prelude to a decades-old story told many times before is that among other outcomes I genuinely looked forward to meeting the Polish contingent at our GDR-army-surplus tent camp out in the woods near the Planterwald S-Bahn station. I’d been told the Poles always came out in force, and sometimes brought vodka with them.

However, it is unlikely that any Polish students coming to East Berlin in the summer of 1989 would have been overt activists or dissidents. Students from the East Bloc who took part in internationally-oriented programs like this one would have been vetted and approved, probably ruling out the possibility of reformers infiltrating the compound.

And the main reason I wanted to meet the Poles was to learn more about reform in the form of Solidarity, which had started as a trade union at the Lenin Shipyards in Gdansk, then blossomed into a nationwide Polish movement for human rights and democracy.

As it turned out, or so our two Swiss handlers confided later over beers and schnapps, the East Germans had unceremoniously blackballed the entire Polish delegation, taking no chances that incoming Poles might be carrying the contagion of democracy.

Conversely, having been only a month and a half since Solidarity famously won a parliamentary election the communists rigged against it, perhaps the Polish students realized there was no longer any reason to volunteer for work in East Germany.

It should be said that none of us foresaw the communist edifice vanishing, but the exclusion of the Poles from the summer exchange program pointed to a tacit acknowledgement that change was coming to those territories kept under firm Soviet control since the conclusion of the Second World War.

Solidarity was an existential threat to the established order, and unknowingly East Germany was poised to become a domino, albeit a domino falling in a completely different direction than American anti-communists always thought.

Allow me to pause for a moment and make perfectly clear this one fundamental point: There probably would have been upheavals in the East Bloc at some juncture, but insofar as they occurred when and how they did, it must be understood that Soviet leader Mikhail Gorbachev was their major catalyst.

We tend to credit Ronald Reagan’s exorbitant military expenditures for bringing the Soviets to heel. They were indeed a slight factor, as was Reagan’s scripted ideological utterances. Tearing down the wall was an excellent rhetorical flourish – and Mr. Gorbachev did the heavy lifting to facilitate it.

As the excellent European Solidarity Centre in Gdansk, Poland rightly illustrates, for so long as Gorbachev’s superannuated predecessors Leonid Brezhnev, Yuri Andropov and Konstantin Chernenko were reasonably conscious (never a sure thing considering their decrepitude), the USSR’s foreign policy with regard to its European vassals remained one of raw power.

(As an instructive aside, the three Soviet leaders preceding Gorbachev succumbed within three years of each other. When Reagan was awakened with the news that Chernenko had passed away, he reportedly said “How am I supposed to get anyplace with the Russians if they keep dying on me?”)

Brezhnev’s “doctrine” of intervention held that any challenge to the status quo of these nations, whether coming from the outside or within, would be met with compensatory force. He’d signed the orders for intervention in Czechoslovakia in 1968, just as Khrushchev had done in Hungary in 1956. Large Soviet garrisons scattered throughout the East Bloc might yet be deployed to cleanse dissent.

Presumably no one understood this daunting fact of political reality any better than a soldier, which brings us to General Wojciech Jaruzelski. In 1981, Jaruzelski fronted an internal coup of sorts and became Poland’s leader. Martial law was declared, and a crackdown against Solidarity commenced.

In later life, Jaruzelski more or less rationalized these actions as necessarily patriotic; after all, had someone not taken the initiative to suppress Solidarity, there’d have been an invasion – and isn’t torture administered by one’s own countrymen always preferable to that of an outsider?

But take away the threat of invasion, and the paradigm changed; as such, there is no choice except to acknowledge the extent of the shift after 1985 when Gorbachev conveyed the message to Warsaw Pact toadies Jaruzelski, Erich Honecker, Gustav Husak and János Kádár that come what may in their rigid domains, Soviet troops would remain confined to barracks. The Brezhnev Doctrine was repealed, and with its demise came the breathing space that spawned opportunity.

As the European Solidarity Centre’s extensive exhibits explain, this process did not come easily for Poland even with the specter of Soviet intervention abated. There had been thaws before, and after all, Gorbachev might be overthrown and a new hard-liner installed to instigate the red restoration.

The larger truth was that all the Soviet satellites were exhausted and teetering on the verge of bankruptcy; what’s more, so was the USSR itself, and this was Gorbachev’s most basic and transformative realization. Communism as it existed when Gorbachev became general secretary was inexorably broken. Even before Reagan’s determination to bludgeon communism with America’s wallet, the notion of a colonial command economy backed by tank and guns was failing fast.

Gorbachev was proven wrong in believing the rot could be reversed, but in the beginning at least he understood the equation: reforms were imperative for the Soviet Union, and yes, they might fail, but they couldn’t even start without offloading the dead weight represented by the USSR’s satellites.

It is likely that in Poland, Gorbachev’s message to Jaruzelski differed little from what he was to tell East Germany’s Honecker a month or so after my communist groundskeeping employment ended: “He who is too late is punished by life.”

Considering all this, our visit to the European Solidarity Center in early November was tremendously moving for me.

The Solidarity trade union movement evolved during the decade of the 1970s, with sparks from nearby Gdynia and other Polish workplaces combining to gestate within the vast confines of the Lenin Shipyards, then the world’s fifth largest ship builder.

This long-since privatized shipyard has been receding ever since communism ended, and it now occupies only a small bit of its former footprint, with abandoned industrial acreage gradually being redeveloped in a familiar, contemporary way for mixed-use housing, business and recreation.

The European Solidarity Centre stands adjacent to the shipyard’s Gate #2, where Lech Wałęsa announced Solidarity’s deal with the government following a strike in 1980. It was the same agreement Jaruzelski sought to circumvent less than two years later through the imposition of martial law, which lasted until 1983. 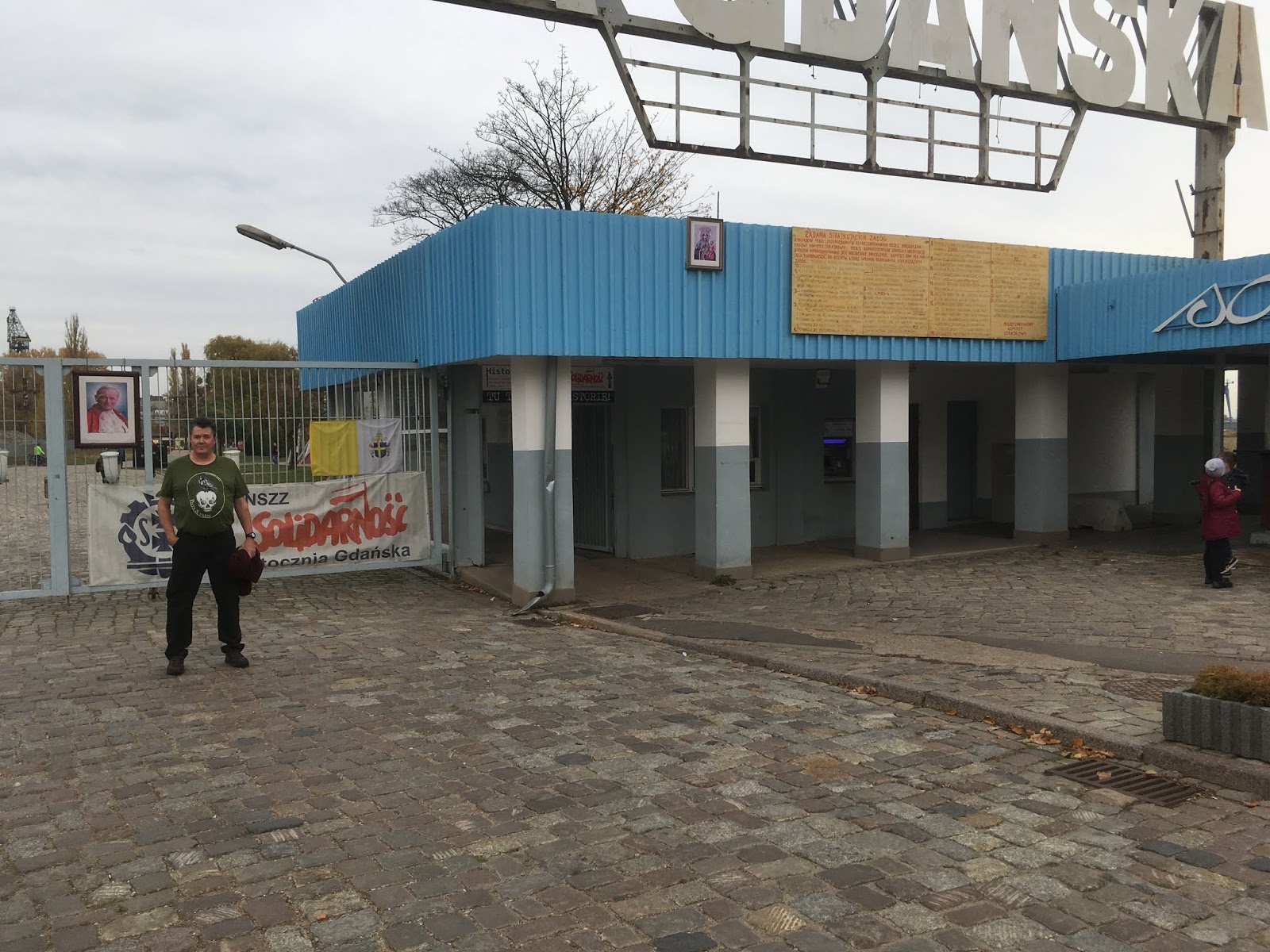 Clandestine and underground, Solidarity picked up where it had left off. As we’ve already seen, Gorbachev came onto the scene shortly thereafter, and there was another international player of inestimable importance to what came next: Pope John Paul II, a native Pole.

In Poland, atheistic communism met its match in the form of the Catholic Church, especially after Karol Józef Wojtyła was elected Pope. To understand this, it’s often forgotten that in much of Europe, the conclusion of fighting in World War II brought with it boundary changes and ethnic cleansing.

Poland’s boundaries were redrawn. Ethnic Germans were expelled, and their places taken by Poles forced to move west after the absorption of former Polish lands into the USSR. The Holocaust had erased pre-war Jewish populations, and post-war Poland became almost 100% Polish – and just as decisively Roman Catholic.

The militancy of Polish workers fused with the internationalism of the church at precisely the time when the grip of the Soviet leash loosened. In 1989, Solidarity had progressed to the point where it was allowed to contest that carefully orchestrated parliamentary election, and shocked the world by winning every last seat it was allowed to contest, save one.

The election took place in June. The parks department shovel was handed to me in August. By November, the Berlin Wall had fallen.

Solidarity’s Wałęsa quickly became president of Poland, but the anti-communist trade union movement didn’t translate very well into competent post-communist governance. It was the perfect instrument for a limited aim, and as the devout shipyard electrician Walesa subsequently observed, God’s chosen destiny for him was to defeat communism. Non-communist Poland demanded a different skill set, and neither Walesa nor Solidarity possessed it.

From a larger perspective, communism was an ineradicable part of the postwar settlement — until it collapsed. Capitalism’s mutation into its own neoliberal new world order was supercharged by communism’s demise. Brexit and Donald Trump are two current symptoms of the postwar global settlement’s decay and death.

It’s up to you to decide whether our current variables are promising or terrifying, although it remains that we’re all headed somewhere, and speaking for myself, I merely try to keep enough gin in stock to cope with the journey.

The Poland we visited earlier this month is a vastly changed place from my first glances of it in 1987. The European Solidarity Centre serves as a reminder of what it took to get from the past to the present, while necessarily offering no guarantees that “here” is the best possible outcome.

There won’t be anything like Solidarity again. The question is whether lower-case solidarity is still possible in these times.

November 1: ON THE AVENUES: Three books by Polish writers.